The women's Bundesliga provided quite the spectacle, with two shocking upsets involving Bayern Munich and Wolfsburg. Werder Bremen celebrated a passionate first victory, and Sassuolo are overachieving in Italy. 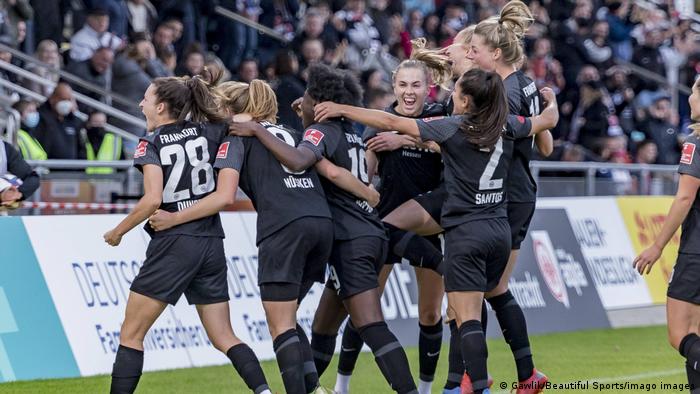 If there is a God and he loves football, then this weekend's action in the women's Bundesliga would have been sure to please.

For the first time in years, anything seems possible at the top of the table. The term "top of the table" can be used in a broader sense in this context because it includes half of the 12 clubs in the division.

It's all thanks to some surprising results from matchday 6. First, Hoffenheim beat Wolfsburg 2-1 on Sunday in a very calm and composed manner, a game in which the Wolves showed weaknesses in the first half. After many personnel changes in the offseason, the defending German Cup winners are not yet at peak performance levels, and Hoffenheim repeatedly and elegantly pushed forward. German international Lena Oberdorf sealed the defeat with an unfortunate own goal.

After that stunning upset, Eintracht Frankfurt defeated Bayern Munich 3-2 in a completely crazy finish. In the 83rd minute, things seemed to follow the script as Maximiliane Rall gave Bayern the late lead. But Laura Freigang and Sjoeke Nüsken turned the scoreline around with two goals in two minutes before added time.

First lost of the season for Bayern Munich women

The results have shaken up the table considerably. Bayern, the defending league champions, now just barely lead the table, with Bayer Leverkusen, who have yet to play any of the top sides, and Eintracht Frankfurt possessing the same amount of points through six games. Wolfsburg, who won four consecutive women's Bundesliga titles from 2016-17 to 2019-20, find themselves in an unfamiliar fourth place, level on points with Hoffenheim. Even Turbine Potsdam, who lost two of their first three games, are not far behind in sixth after their third straight win.

The women's Bundesliga thus has something that is sorely lacking in many other football leagues, a real race for the title — if six matchdays is anything to go by. And with so many teams bunched together, there's guaranteed to be a top game almost every weekend. Now all the German public has to do is tune in.

Gone are the days when the only real top match was Bayern against Wolfsburg. This also means that the investment in the second tier (Leverkusen, Frankfurt, Hoffenheim) is paying off. It makes the league more equal, at least for now.

The main factor that could tip the balance is money from international competitions. A more competitive domestic league will further enhance their reputation in Europe where there's spectacle at the top.

In a relegation battle, "passion" is a very overused term. At the top are tacticians, at the bottom there are fighters. In a way, passion serves as compensation for the suffering of having to be down there as an excuse or a cheap psychological trick.

For once, the term was appropriate for what Werder Bremen staged in the 1-0 win against SGS Essen. The first 25 minutes could be described as miserable for the hosts as Essen locked them up. Bremen were lucky not to be behind two minutes in after a shot clanged off the post.

The level of play was as poor as the pairing promised. But then the Bremen women tackled and counterattacked their way into the game, or, as captain Lina Hausicke told DW: "We tried to take the fight on, to play Essen with a lot of mentality." 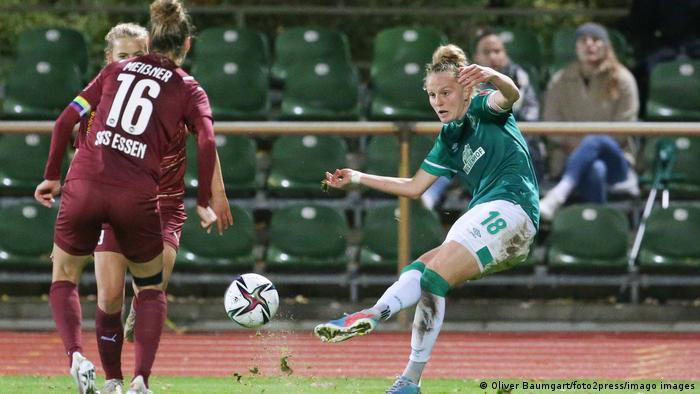 Hausicke was ultimately the one who scored the decisive goal from a free kick to give Bremen their first win of the season. As a result, Werder moved out of the relegation places for the time being and created a decent buffer.

"With that, we can lift ourselves off a bit, and then we'll try to perform with a lot of passion and mentality for the rest of the season," she said. "Also enthusiasm for the game, which you hopefully saw today."

The Werder fans in attendance were invigorated by the performance, but the question remains why so few turn out for the women's game from Bremen's progressive fan scene, which is currently not blessed with top-flight men's football. Hausicke can't answer the question, either.

Major European leagues increasingly resemble their male counterparts at the top, but not everywhere. In Italy, Sassuolo is top of the table after six games.

It is a team with great tradition. The ambitious women's team was founded as early as 1976 as an independent club, then won several championship titles in the 1990s. It was most recently called Reggiana CF until in 2016 when, due to a lack of funds, it slipped under the umbrella of the men's club US Sassuolo. Now Sassuolo is thriving again and the press is raving.

"[Coach] Piovani continues to practice understatement," Sergio Mutolo writes on the women's soccer portal calciopress.net. "He still talks about staying in the division, but no one believes such words anymore" — especially with attacker Sofia Cantore, once again on loan from Juventus, who has "fantastic technical and athletic skills," can be found anywhere on the field and "has the will to take on the whole world."

Meppen moving back up?

After seven matchdays in Germany's second division, relegated SV Meppen is heading for a direct return to the top flight. They are pulling away from the pack, possessing a three-point lead after a 2-0 win over Wolfsburg's reserve team.

Nuremberg are another positive surprise. Freshly promoted from the Regionalliga, they are now in fourth place after a win against Ingolstadt. The club wants to strengthen the team further in the future. The result is already impressive.

Why do women soccer players earn so much less than men? In the United States, Megan Rapinoe has taken the debate to the very top. And what about the clubs in the Bundesliga?