Berlusconi rules out re-election | Europe| News and current affairs from around the continent | DW | 09.11.2011

Italian Prime Minister Silvio Berlusconi has promised to step down next week after the adoption of an economic stability law. He said he would not stand for office again. 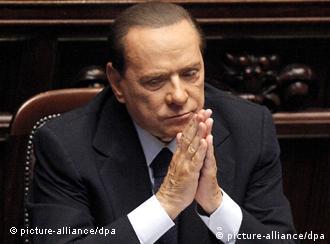 Berlusconi has been under mounting pressure for weeks

Italy's premier Silvio Berlusconi has said he will not stand for office again. He told Wednesday's edition of the Turin daily La Stampa that he would not be a candidate in early elections.

"I only see elections for February, elections in which I will not be a candidate," he said.

On Tuesday, he had announced his imminent resignation, ending a political career spanning two decades. A statement released by the office of Italian President Giorgio Napolitano, said Berlusconi had promised to step down once crucial economic reforms have been approved in parliament. The vote on the economic stability law, which has been demanded by the European Union, is due to take place next week.

"Once this commitment has been carried out, the prime minister will submit his resignation to the head of state," read the statement.

Napolitano will then "proceed with traditional consultations with maximum attention to the positions and proposals of every political force - those of the majority from the 2008 elections as well as the opposition," it added.

Berlusconi met with the Italian president in the wake of losing his parliamentary majority during a key budget vote earlier on Tuesday. Berlusconi won the vote on the ratification of 2010 public accounts but obtained only 308 votes, far below the 316 needed for an absolute majority in the 630 seat chamber.

Immediately after the vote the centre-left opposition repeated calls for the premier to resign. 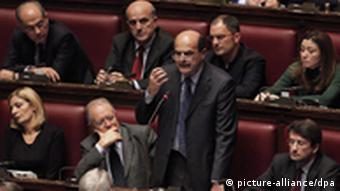 "I ask you, Mr Prime Minister, with all my strength, to finally take account of the situation ... and resign," said Pier Luigi Bersani, leader of the main opposition Democratic Party.

Italy's centre-left opposition abstained from the vote, after previously saying they wanted to highlight the weakness of Berlusconi's government while allowing the passage of a bill that was vital for government funding. They were joined by several rebels within Berlusconi's own People of Freedom (PDL) party.

In a serious blow to the 75-year-old prime minister earlier on Tuesday, his closest political ally, Umberto Bossi, also called on him to step down. The leader of Berlusconi's coalition partner, the Northern League, said the embattled premier should be replaced by Angelino Alfano, secretary of Berlusconi's PDL party.

Many politicians, frustrated by the slow pace of Rome's economic reform, are thought to want a new centre-right government to handle the financial crisis. In recent days, however, Berlusconi had remained steadfast in his refusal to step down.

But it wasn't just the fate of the Italian leader that had European leaders waiting with baited breath for the outcome of the vote. As a precondition for the approval of any future budgets it was seen as a crucial step towards stabilizing the beleaguered Italy economy. 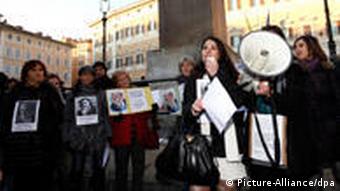 As the eurozone's third largest economy, Italy has been under pressure from European politicians to introduce a fresh round of austerity measures designed to bring its sovereign debt under control.

A national debt of 1.9 trillion euros ($2.6 trillion) has long rendered Italy a candidate for international financial assistance, but poor economic growth forecasts and increased political instability have led to more fevered speculation that the country might follow in the footsteps of Greece, Ireland and Portugal.

The interest that Italy must pay on loans reached a record level of 6.67 percent in Monday's trading, a rate that many analysts consider unsustainable.

Faced with three separate legal trials, Berlusconi's public approval ratings had slumped to an all-time low of 22 percent in October. Tens of thousands of opposition supporters took to the streets of Rome on Saturday calling on the prime minister to step down. He currently stands accused of bribery, tax fraud, abuse of power and paying for sex with a 17-year-old nightclub dancer

Silvio Berlusconi's announcement that he will step down soon comes after an unparalleled career in Italian politics. After decades of dodging critics and scandals, financial markets were the prime minister's Waterloo. (09.11.2011)

As Europe's politicians struggle to rescue Greece, Italy has increasingly become the epicenter of the eurozone debt crisis and must pay even higher interest rates on bonds. But how dangerous is the situation for Europe? (09.11.2011)

Eurozone finance ministers have agreed on a timescale, if not the details, for an enlarged fund to allay market doubts about sovereign debt. Limited progress was made as concerns remained over Italy and Greece. (08.11.2011)