Forget about Russian gas, German coal or controversial nuclear power plants. The energy source of the future is cheap and available everywhere on the streets of Berlin. You may have even had to scrape it off your shoes. 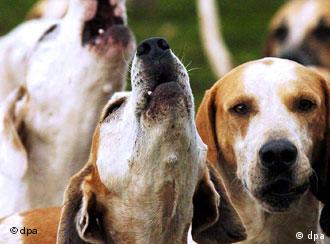 Power to the pooches

In Berlin, dog poop happens. Literally, all over the place. According to Berlin sanitary officials, 55 tons of doggie mess is generated on the streets of the city every day. And most of it is left unattended -- for other canines' sniffing pleasure, for children to play hopscotch around, or for senior citizens to hold their passionate diatribes against.

The German capital is an extremely dog-friendly city. Dogs attend gallery openings, jazz concerts, Sunday brunches and baby showers. But Berlin's dog owners are mostly of the let-somebody-else-scoop-the-poop persuasion. It's part of the laissez-faire attitude that Berliners are known for. One needs to have some sense of history. What's a little poo here or there in a city that had the iron curtain run through its very heart? 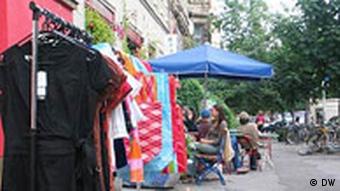 Berlin is hip and easygoing, but walking the streets poses its own dangers

Yet anybody who ever walked down Wrangelstrasse in Berlin's multiethnic Kreuzberg district, or along Kastanienallee in the hipster paradise known as Prenzlauer Berg, is more likely to step into a pile of dog doo than run into somebody who would wish them a nice day.

"There are way too many dogs in Berlin," Bernd Krüger, 65, told the daily Berliner Zeitung. "My recommendation would be to ban dog sales in Berlin for five years."

With 150,000 dogs marking Berlin as their home -- this staggering number roughly corresponds to the combined human population of Liechtenstein, Monaco, San Marino, the Marshall Islands and Nauru -- Berlin officials have finally realized that Germany's cool and vibrant capital is suffering from a major poop attack.

Educate the masses, fight the poop

That's why they launched a week-long awareness campaign on Oct. 16. With posters and flyers, the city is hoping to make dog owners a little more respectful of their surroundings, while alerting them to dog waste as a health risk and a source of general annoyance. 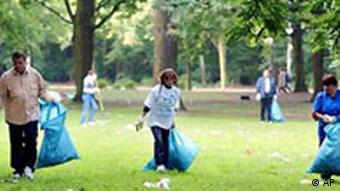 Cleaning up in Berlin is not always fun

Popularizing poop-scooping, however, may turn out to be difficult.

"It's like tilting at windmills," said the mayor of Berlin's Neukölln district.

But there is still hope. Berlin officials are carefully studying the example of San Francisco, in which a pilot project is exploring the feasibility of turning dog poop into biofuel. Pet dung may not make a great gift, but if collected and run through a methane digester -- a container in which bacteria break down the feces to create methane -- it can make its way directly to a heater, stove or any other appliance powered by natural gas. 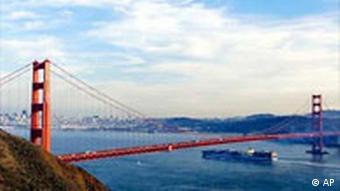 "We know about the San Francisco project," said Bernd Müller, a spokesperson for the city's sanitary services. "Together with scientists from Humboldt University, we are currently looking into whether it would be possible and economical to do something like that in Berlin."

Keeping in mind that energy is going to be one of Germany's main concerns during its six-month presidency of the European Union, starting in January 2007, the importance of such a truly alternative energy source could even catch on in other European countries as well.

Will there be a backlash?

Nobody knows yet what will happen next in Berlin's heroic attempt to clean up its streets. There is, however, hardly a demonstration in the city that doesn't inspire a counter-demonstration. 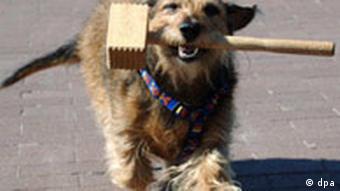 What is this world coming to? Soon we'll have to start picking after ourselves

Berlin's Love Parade, for example -- a dream come true for techno maniacs from all over the world -- was deemed too commercial by the city's grunge chic mafia. So they organized their own event -- the Hate Parade -- to run in parallel with the celebration of polyester jumpsuits and adrenaline rushes.

Will Berlin dog owners comply or will city officials have to resort to more drastic measures -- anti-poop commandos with gas masks and anti-chemical weapons? Will the unruly dog owners become more disciplined or will a countermovement of disgruntled animal lovers announce that dogs need to have their say in the whole matter, too? Only time will tell.

After repeated encounters with the dark force on a jogging track, Dennis Gebhard, a 23-year-old Berlin design student has started to sell a warning sign he devised with the picture of a terrier that reads "Phooey, Daddy! Phooey, Mommy!"

"It wouldn't be bad if my signs were all over the city," Gebhard said.

Politics is a dog-eat-dog business where it pays to read between the lines. So when Russia's President Putin presented Angela Merkel with a stuffed toy puppy Monday, her surprise may have been tempered with suspicion. (18.01.2006)

Animal protection zealots would be the first to warn want-to-please parents not to buy pets for their youngsters' stockings. But one German mother took the "a puppy is not just for Christmas" edict a little too far. (20.12.2005)

How many steps does it take to transform a dog from an arm accessory to a television superstar? Daisy, the canine companion of murdered Rudolph Moshammer, is about to find out. If she can still walk, that is. (27.01.2005)