19 films, 10 days, 8 bears. The German director Tom Tykwer presides over the six-member jury that will decide who will be awarded the Golden and Silver Bears at this year's Berlinale.

The Golden and Silver Bears can create stars and or validate one's status as a renowned artist, so the results of the Berlinale award ceremony are highly anticipated every year all around the world.

This year, 19 films will compete for the top prize in the festival's main competition, including "Transit," a refugee drama by German director Christian Petzold, "Dovlatov," a 1970s Russian thriller by Alexey German Jr., "Daughter of Mine," an Italian family film directed by Laura Bispuri and the Polish work "Mug" by Malgorzata Szumowska. 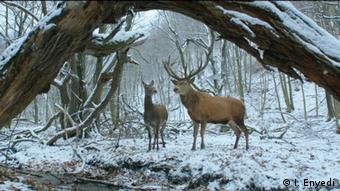 "On Body and Soul" won the Golden Bear last year

The six-member jury presided over by the German director Tom Tykwer will decide on the winners. Belgian actress Cécile de France or American producer Adele Romanski, who helped develop the 2016 hit "Moonlight," are among those who will judge the qualities of the competing titles.

Get to know the complete jury in the gallery above.

Six critical minds are to decide the winners of this year's Golden and Silver Bears. Oscar winners, a composer and a critic are represented in the jury headed by German director Tom Tykwer. (16.02.2018)