Berlin's public transport company has launched a campaign to be listed as a World Heritage site. Kate Ferguson explains why it deserves to be in the same league as Machu Picchu and the Taj Mahal.

Berlin's transport company, the BVG, is campaigning for the city's transit network to be recognized as a World Heritage site and I am beside myself with enthusiasm. The call-to-action video features a series of ridiculous yet highly relatable images of a changing Berlin: a hip bar where people are downing shots of mouthwash, a cyclist wearing an animal mask for no good reason and a waiter who speaks only English.

The antidote to all this pretension is the salt-of-the-Earth Berliner Verkehrsbetriebe where you can rely on gruff drivers, congested, trash-filled carriages and regular delays. In other words, a rare and precious constant in need of preservation.

There's an obvious confidence underlying the BVG's self-deprecation. No one, not even a transport operator, draws attention to their faults unless they find them at least a little bit endearing.

Speaking of faults, one of mine is that I have never learned to drive. As a result, I get some form of public transport — whether subway, bus or tram — pretty much every day. What began as an exhilarating fling — "I can go anywhere and it's cheap" — has since morphed into something else entirely: a love for what feels like the "real" Berlin:

The man who travels with a parrot on one shoulder and a cat on the other. The deafening, life-affirming chatter of herds of kindergarten children in high-vis vests. The exhausted cry of their teacher: Nächste Station! Wir steigen aus! 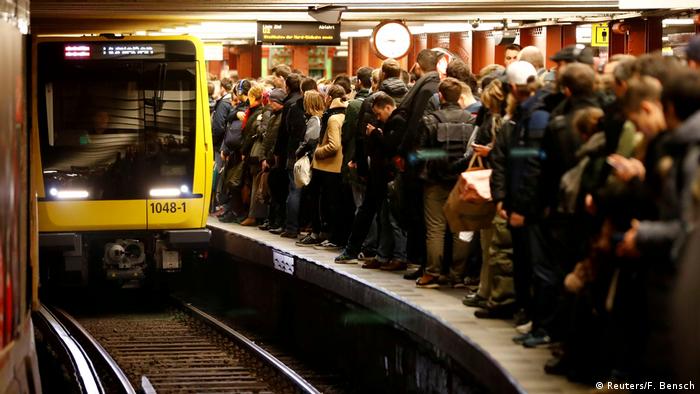 A subway train arriving at Alexanderplatz station in downtown Berlin — you really have to love people to enjoy the ride :-)

Late at night, an old woman moving her finger over the Koran in the same carriage as a bunch of teenagers drinking Berliner Kindls and blasting German rap. Early in the morning, just after 5 o'clock, the young woman opening the coffee stall on the platform on the U8 line. The croissants sliding down the display case one by one.

The men and women lying on benches. Their faces buried in sleeping bags. Empty bottles at their feet ready to trade in for a deposit at daybreak. The sight, the other morning, of a man picking his bottles up after the Lidl bag they were in split. The way he was so careful in how he rearranged them in his rucksack. How they didn't all fit.

Horrible things too. A man thrashing his two little boys on the far end of the platform. The lump in your throat five minutes later when the train hasn't come and you're still thinking if you should have intervened. Then you look over and the kids are running around again playing. The father looking at his phone. The mother staring into the distance.

Old posh people in their Sunday best, going to the opera on the U2. Stopping off for a glass of wine first. A crazed individual spouting out conspiracy theories. Dogs. So many dogs! Their wet snouts peeking out from beneath the seats. Their panting just audible above the roar of the train. The way you look up at their owner to see if they fit together. 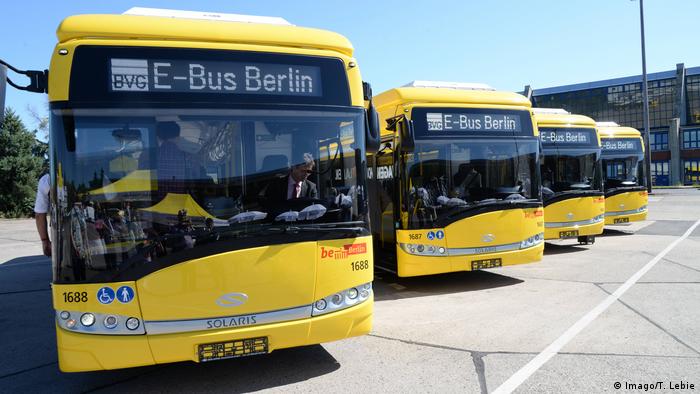 Berlin buses are getting ready for the age of e-mobility, but progress is slow

The sound of Arabic and Turkish and Spanish and English and Italian and every other language under the sun. The three guys with the boom box who sing "Hit the Road Jack" and nothing else. The flautist. The woman in plaits who sells the street magazine and smiles like an angel if you buy it.

And yes, it's about economics. Go to London and try to get onto a platform without a ticket. No benches for the homeless there, just turnstiles. You literally can't be part of the network without having money.

In Berlin you pay €81 ($90) for a monthly travel pass which includes the subway, trains, buses and trams. In London, it's €276 for a ticket that doesn't even include buses or trams.

In the next four years, Berlin's government, made up of a coalition of the center-left Social Democrats, Left Party and the Greens, will spend €25 billion on the city. Most of it will go toward building housing and schools and updating transport networks.

We pay for it with our taxes and as with so many things in this city, the policy is unrepresentative of notoriously thrifty Germany. But every day as I travel to and from work, I am reminded of the value to be gained from sharing a seat, a clammy pole or simply a moment with a person you would otherwise never encounter.

In a world that is becoming so much more polarized, such a culture is precious and worth preserving.

Achtung Baby!: U2 give impromptu gig on Berlin's subway

U2 frontman Bono and guitarist The Edge were in Berlin on Wednesday, treating fans on the city’s subway system to an impromptu mini-concert. The musicians were promoting their first album in three years. (07.12.2017)