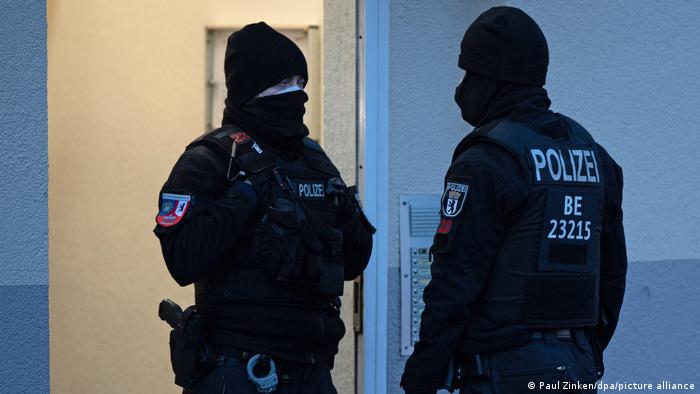 Berlin's Senate has announced on Twitter that it has banned the "jihadist-Salafist association Jama'atu Berlin," also known as Tauhid Berlin.

The tweet Thursday said police in Berlin and Brandenburg had carried out early-morning searches of properties belonging to the group's members.

A spokesman cited by the German press agency dpa said around 800 police — including special operations commandos — took part in the raids, which targeted the districts of Reinickendorf, Moabit, Wedding and Neukölln. No arrests were immediately reported.

What is the radical group accused of?

A statement from the Senate said Jama'atu Berlin had propagated "a martyr cult," supported the "Islamic State," rejected the German constitution and called for sharia as the sole legitimate law.

"(In the group), there are severe anti-Semites who are calling for the death of Jews," Berlin Interior Secretary Torsten Akmann said.

The group is believed to have about 20 members, some of whom had attracted attention in the past by handing out leaflets in parts of Berlin.

Berlin Interior Senator Andreas Geisel told a news conference the unregistered association had been under surveillance for two years.

"The danger of Islamist terrorism remains high," Geisel said. "Today's ban is another building block in the resolute fight against violent extremism."

The Tagesspiegel newspaper reported that several of the group's followers previously attended the Fussilet Mosque, which was closed down in 2017. Anis Amri, the Tunisian national who carried out an attack on a Berlin Christmas market in 2016 killing 12 people, also frequented the mosque, according to authorities.

The number of Salafists in Germany rose to a record high of 12,150 in 2019, according to the domestic intelligence agency.

The state government of North Rhine-Westphalia is betting on wit and humor as an antidote to Islamist extremism. Extremists use YouTube to target young people, but NRW wants to fight fire with fire.

Salafist preacher Sven Lau to be released from German jail