You don't really know Berlin if you haven't seen it with birds' eyes. Buckle your seatbelt for an aerial tour of the German capital with DW's Tam Eastley. Urban climbers and World War II remains await. 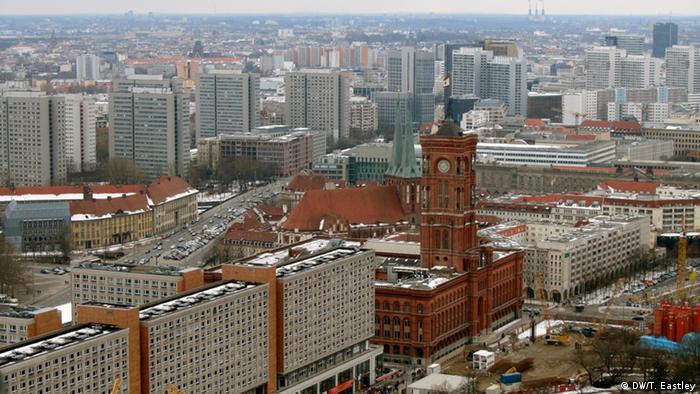 Berlin is notoriously flat. As a jogger and cyclist myself, this is a trait I rarely complain about. It also puts me at ease knowing that, because of the city's lack of inclines, I have a perfect view of the TV Tower from almost anywhere in the city, in case I get lost.

However, given Berlin's foundations on low lying marshy woodlands, the capital seemingly has little to offer for people who like to experience cities from a higher viewpoint, save for a few small man-made hills. But when you ascend as high as possible, Berlin transforms from a sprawling metropolis with seemingly unconnected areas, long abandoned urban stretches and bizarre architectural outcroppings, to a beautiful and understandable map.

But to find this out, you have to hit the rooftops. So, grab a day ticket for the tram, because these three spots are spread throughout the city.

With a bird's eye

The Neukölln Arcaden shopping center at the Rathaus Neukölln subway station is in the heart of one of Berlin's most multi-cultural neighborhoods. Though I live in the area myself, I first discovered this rooftop gem through a guidebook - but its allure lies precisely in its seemingly hidden and secret nature.

To get there, take the elevator to the fifth parking level of Neukölln Arcaden. Even though the roof is on the sixth level, the button in the elevator doesn't work, which only adds to the adventure. From the fifth level, walk slowly and carefully up the driveway to the sixth level. (I've never seen cars up there, but you never know.) The outlook from up here is almost a full 360 degrees, and is completely serene, offering unobstructed views of recognizable buildings of the capital, like the Rotes Rathaus (Red City Hall) at Alexanderplatz, out to the O2 World event stadium.

From the rooftop, Berlin stretches all the way to the horizon, but the best part about this spot is being able to see Neukölln up close. Hidden courtyards are exposed to reveal hidden treasures, like an apartment building to the west whose facade is completely covered in beige and green mosaic tiles. Residents sit on their balconies talking on their phones; loopy, colorful graffiti hides in the nooks and crannies around chimneys. The roar of cars down on the busy Karl Marx Strasse is muted; music from the nearby apartment buildings wafts up to the uncovered concrete space; and the whirring of the buildings' fans creates a comforting blanket of white noise.

In the summer, groups sit around drinking beer and eating döner kebabs while a security guard silently strolls the grounds, observing. In the winter or early spring, when snow still blankets the ground, it's completely quiet and deserted.

Up north, the Flak Tower at the Gesundbrunnen tram station in Humboldthain Park is just a short walk from the train station. Built between 1941 and 1942 under Hitler's orders, it is one of three flak towers that were constructed in Berlin during World War II. The building was part of the Nazis' anti-aircraft defense against the Allies and also served as an enormous bunker for up to 50,000 civilians - more than three times its constructed limit.

After Germany was defeated, the French blew up part of the Flak Tower in Humboldthain Park and filled it with war debris. Today, the northern wall and the two lookout turrets are the only above-ground section that remained and is a popular place for joggers, families tobogganing in the winter, strolling couples, and street artists. Some images on the walls are large and beautiful, while lovers have scribbled their undying passion for each another on spare spaces.

From the top of the tower, you have a perfect view of the trains speeding in and out of Gesundbrunnen station along its web of tracks, with occasional schedule change announcements breaking through the bird songs. Smokestacks pop out from around the sprawling and colorful post-war apartment buildings. Above, low flying airplanes make their way to and from near-by Tegel Airport.

On the way down, at the foot the Flak Tower, you can see carabiners dangling from concrete outcroppings, used by the German Alpine Association when the weather is nice for urban climbing. Local resident Paul Scanton writes in his blog, "On the weekend, we watched as four different pairs climbed the different routes, and enjoyed the sight of surprised visitors waiting for their tour of the ruins at the top of the towers as they saw the hands and then the face of the climbers appear on the 'wrong' side of the fence."

Right in the middle of the city, the Park Inn at Alexanderplatz offers one of Berlin's highest vantage points. From the lobby, take the elevator up to the 37th floor, and then walk up the staircase to the roof. Unfortunately, the views cost three euros ($4), even for those staying at the hotel, and the tight space at the top is not ideal for claustrophobics. But it is a less expensive alternative to ascending the TV Tower, and the views of Berlin's downtown are incomparable.

Up here, you only have a less than 180-degree view from the 150-meter (490-foot) viewing platform. Nevertheless, Berlin seems to magically morph from a pre-industrial town with perfectly organized red-roofed apartment blocks around three-tiered courtyards, to a booming modern city. Around Alexanderplatz at the foot of the TV Tower - so close it feels like you could reach out your hand through the protective netting and grab it - silver high-rises pop up around the city's centuries old Nikolai Quarter.

The tram snakes a winding path around the shopping centers, from Hackescher Markt through to Jannowitz Bridge. The German flags of the Reichstag sway in the wind, their colors contrasting against the bare trees of the Tiergarten stretching out behind it, with the Victory Tower's golden sculpture in the middle of the park gleaming.

Exploring the various rooftops spread out around Berlin made me curious about my own rooftop, and those of friends. Sometimes, sitting at my desk at work, I'll see the long shadow of a person spread across the building opposite, or I'll hear pounding noises from above, like people are walking around. At times like these, I'm reminded that there's another world up there, one worth exploring.

Attention Berlin crooks, thieves and other urban evil-doers: Beware! A powerful, unexpected force is taking over the city and has bad guys shaking in their boots, says DW's Leah McDonnell. (05.04.2013)

A new concert series based in Berlin is offering up-and-coming bands from the Scandinavian countries a package to tour Germany. Does this influx of new talent suggest a sudden wave in popularity for Nordic music? (05.04.2013)