Do something for the environment and your waistline, DW author Harald Franzen thought. So he traded his Vespa for a bicycle. Here is how it went. 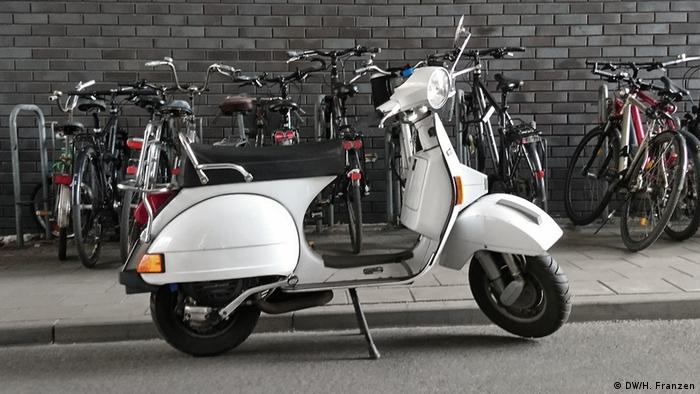 I have been commuting to work on a Vespa PX, a classic scooter first built in 1977, for about a year. The technology that propels this marvel of Italian post-war engineering is so simple, it doesn't even require a battery. Completely analog in an increasingly digital world, it was the scooter I always wanted as a teenager and I love riding it now.

But while the old-school technology is part of the charm of riding such a classic, it is also part of the dilemma. Due to its age, my scooter has no catalytic converter and is powered by a two-stroke engine. By design, these motors are notoriously inefficient and run on a gasoline-oil mix that first greases the piston and then burns to propel the vehicle. Yes, it smells as bad as that sounds. So when I sit at a traffic light and the exhaust fumes start to envelop me, I often look over at the people on their bicycles waiting next to me for the light to turn and I feel awful for exposing them to my dirty exhaust.

So inspired by my colleague Klaus Esterluss' account of biking in Berlin and increasingly alarmed by my own sedentary lifestyle, as well as by this missed opportunity to make a small contribution to combating climate change, I decided to give cycling another chance.

Don't get me wrong, I have always enjoyed cycling and I used to commute to work on a bicycle but as I mentioned in a previous post,  I recently moved to the outskirts of Berlin and my commute is no longer a relaxing 5 kilometers (3.1 miles) but a comparatively long 13. Hence the Vespa.

Undeterred by the greater distance, I got my bike back into shape last week. Then, on Monday, I took the plunge. To be honest, I was pleasantly surprised - for the most part. Klaus' account of deadly city traffic and insufficient bike infrastructure had me worried but when I left home, I didn't just find plenty of space to bike, I also found extensive designated bike paths. On the first 4 kilometers of my journey, it was wide open spaces with little bike traffic. I was really enjoying myself - until the wind picked up. 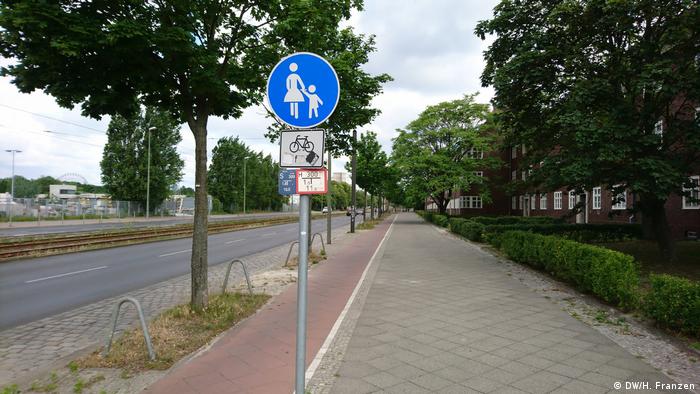 Generally speaking, cycling in Berlin is a lot more pleasant than in cities like Stuttgart or San Francisco because the German capital is essentially as flat as a pancake. But it's also windy and biking against the wind for several kilometers can be a thoroughly frustrating affair, as any avid cyclist will tell you. Especially when you're in a rush to get to work. Thankfully, I caught another cyclist's slipstream. He was in far better shape than I was but I managed to keep up and he got me through the first stretch of my trip.

When the wind finally subsided (it came back eventually), the bike path also abruptly ended. Or rather, the sidewalk officially doubled as the bikepath without any clear markings that indicated where you should walk and bike. To make matters worse, the sidewalk/bike path became narrow and blocked by obstacles like a portable toilet and construction beams. I stayed on it anyway since the road was completely clogged with cars. Riding past them admittedly felt really good but an actual bike path would have been even better. 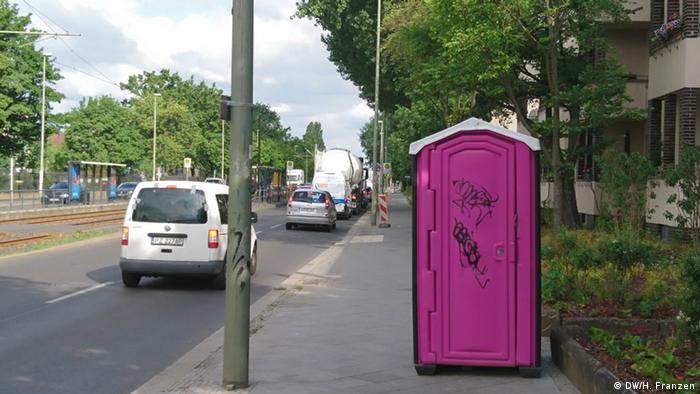 In some parts of Berlin, the designated bike path is more like an obstacle course

As I continued my journey, the bike path didn't return. Instead, I was faced with every cyclist's worst nightmare: tram tracks. Former East Berlin still has an extensive network of these light rail trains and their tracks often run directly on the street. They also get slippery when wet and getting your front wheel stuck in one is the last thing a cyclist wants. I guess it's an inevitable part of biking in Berlin. Still, sharing the road not only with other bikes, motorcycles and cars but a light rail train to boot can get dicey at times.

After passing through mainly residential areas with slow traffic, I reached Karl-Marx-Allee, the grand boulevard of the former East German capital. Here you have palatial apartment buildings set far back from a six-lane road - almost like a highway - that leads to Alexanderplatz and out of the city respectively. Aside from extensive green spaces between the road and the buildings, this street also sports a bike path.

Believe it or not, bike paths can be a curse!

Don't be fooled though, in this particular case, the bike path is both a blessing and a curse. Of course, it's nice to steer clear of the nearby motorized traffic but there is fierce competition among cyclists here. There are far too many bikes on a very narrow path and everyone travels at different speeds - or tries to - resulting in constant near collisions.

It gets worse when the traffic lights turn red. Suddenly, thick throngs of hipsters on rickety retro bikes, pro-bikers in high-tech Tour-de-France-style outfits and young parents wearing odd-looking bike helmets (yep, that's me) pile up at the intersection. And when the lights turn green again, everyone tries to pull to the front to get ahead of the pack. It's not pretty. 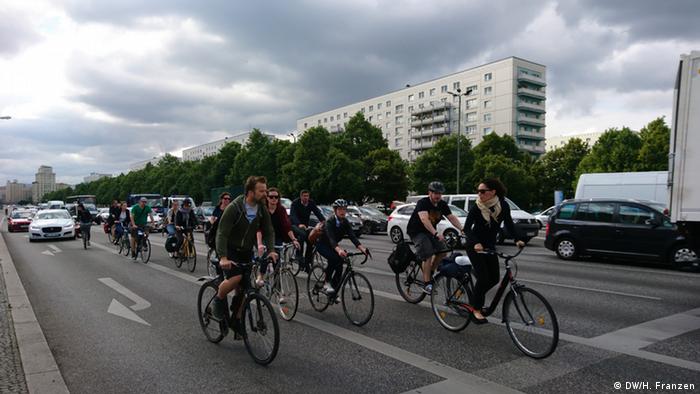 Bike paths are popular in Berlin - too popular in some places. This can make biking more dangerous rather than less

I won't bother you with a detailed account of the rest of my trip. Some parts of it where very pleasant, others hair-raising. What I can say though is that there seems to be little consistency in where Berlin puts bike paths and where it doesn't. The luxurious bike path near my home is nice but completely unnecessary, given the broad sidewalks and lack of pedestrians. A simple sign allowing cyclists to bike on the sidewalk or a line on the ground separating the area where people can walk and bike would suffice. Other parts of my commute are in desperate need of a bike path to protect cyclists from dangerous traffic.

Last but not least, there are sections where bike traffic is so heavy that narrow traditional bike paths simply won't do. They may be nice for weekend cyclists but they make daily commuting not only annoying but outright dangerous.

I understand that building new bike paths can be challenging and that the places that most urgently require them are often also the areas where making space is hardest. But it is high time for Berlin to prioritize and add or expand cycle lanes where they are actually needed.

As for me: My muscles ache since I hadn't biked extensively for quite a while but I definitely want to continue biking to work. It's great exercise and it feels good to get some fresh air before and after a long day in the office. Now, as for that damn wind...