Berlin on Saturday celebrated Christopher Street Day with hundreds of thousands showing up to advocate gay rights. The parade came a day after New York became the sixth US state to legalize same-sex marriage. 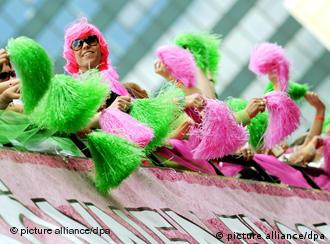 Hundreds of thousands joined the festivities in Berlin

The motto of the 54 float parade was "Fairplay for Diversity" and came just a day before the Women's World Cup opened in Berlin on Sunday. Parade participants campaigned against homophobia in sports.

On Friday, New York became the sixth US state to legalize same-sex marriage, marking a major victory for the gay rights movement.

Same-sex marriage or civil union is already legal in a large number of European countries, including Germany.

After reporting systematic government abuse and discrimination, Amnesty has called on Turkey to ensure that the rights of lesbian, gay, bisexual and transgender people are protected under a planned new constitution. (21.06.2011)

An annual gay pride parade in Zagreb passed largely without incident on Saturday. It came a week after violence marred a similar event in the country's second-largest city, Split. (18.06.2011)

Despite opposition from African and Arab nations, the UN Human Rights Council passed a resolution aimed at combating worldwide discrimination based on sexual orientation and gender identity. (17.06.2011)