A woman of French and Senegalese descent has won the prestigious Prix Goncourt for a novel detailing the harrowing experiences of three women who struggle to preserve their dignity. 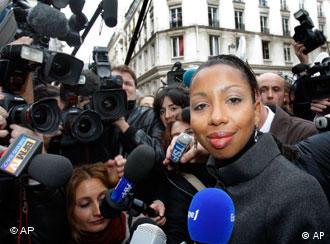 The author moved to Berlin in 2007, protesting Sarkozy's election

"It is the story of three women who are each powerful in a different way," NDiaye told reporters as she received the 106-year-old prize at an award ceremony in Paris.

A story told 'many times before'

"What links them is a deep strength, a belief in who they are, as a way of never doubting their own humanity. They have a quiet strength."

"The story of these migrants has been told many times before, but if this can help people understand their fate a bit better, I will be happy," she said as she received the prize.

NDiaye moved with her husband and three children to Berlin in 2007, to protest the election of French President Nicholas Sarkozy under whom France, she said, is "vulgar" and "monstrous."

But NDiaye - born to a French mother and Senegalese father and raised exclusively in France - told reporters that she had always defined herself as a French woman rather than an African woman.

With her first novel published when she was 17, NDiaye has long been established as one of France's top writers.

The Goncourt prize carries a lot of weight in French literary circles though it only offers a symbolic 10 euro ($14) endowment.

"This gives me great pleasure and I am also very happy to be a woman receiving the Goncourt Prize," NDiaye told reporters. The last woman to win the prize was Paule Constant in 1998.

Spain's Crown Prince Felipe on Friday awarded the city of Berlin the Prince of Asturias Prize for international understanding. He said the city represented "a symbol of hope" 20 years after the fall of the Wall. (23.10.2009)

Everybody is talking about China. But this year's guest country wasn't the only topic of discussion at the Frankfurt Book Fair. Industry insiders had other worries as well, says DW's Gabriela Schaaf. (19.10.2009)