Footage of the demonstrations shows security services firing their guns and water cannons at crowds. Activists have warned of deteriorating freedoms in the long-stable West African nation. 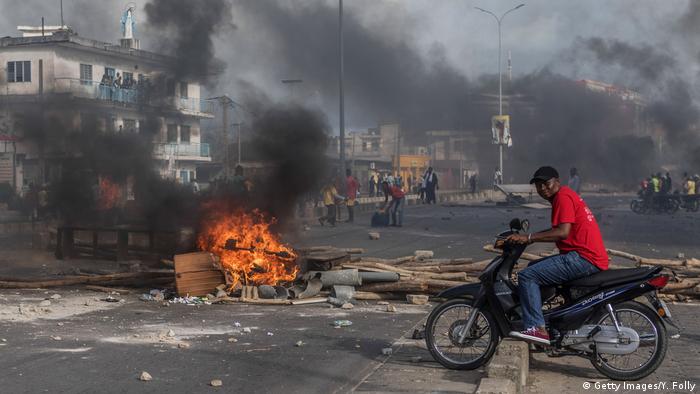 Soldiers fired shots and water cannons at protesters in Benin's capital, Cotonou, on Thursday as security forces began their clampdown on demonstrators angry that opposition parties had been barred from contesting last Sunday's parliamentary election.

Thursday marked the second day of widespread protest in the capital, with marchers calling for President Patrice Talon, who was elected in 2016, to step down.

"We note with concern the ongoing tensions and unrest, resulting in the destruction of property and high-handed response from the security forces," UN spokesman Stephane Dujarric told the press.

The unrest follows a move by the country's electoral commission to bar opposition parties from the recent vote because they did not meet the strict criteria put in place by a new election law. Talon has denied this was the intention behind the law.

Talon's rivals had called for a boycott of the election over the ruling — and most appeared to heed the call, with only 27% of registered voters casting a ballot. Turnout has not been below 50% since Benin's transition to democracy in 1990.

Rights groups such as Amnesty International have warned that the small West African state, long a pillar of stability in the region, is in the grip of a "wave of arbitrary arrests of political activists and journalists," adding that the "crackdown on peaceful protests" has reached an "alarming level."

The president of Benin's constitutional court, Joseph Djogbenou, a Talon ally, said that while there were some "irregularities and disturbances" during the election, they were "still not of a nature to compromise the validity and transparency of the vote."

Up to 90 percent of Africa's art treasures are believed to originate from outside the continent. On the day a report is published in France, a number of artworks claimed by Benin are being returned. (23.11.2018)