Benin's democracy hangs in the balance on election weekend

Incumbent President Patrice Talon is poised for reelection in the West African country. But changes to Benin's electoral system have stacked the odds in his favor at the expense of the opposition. 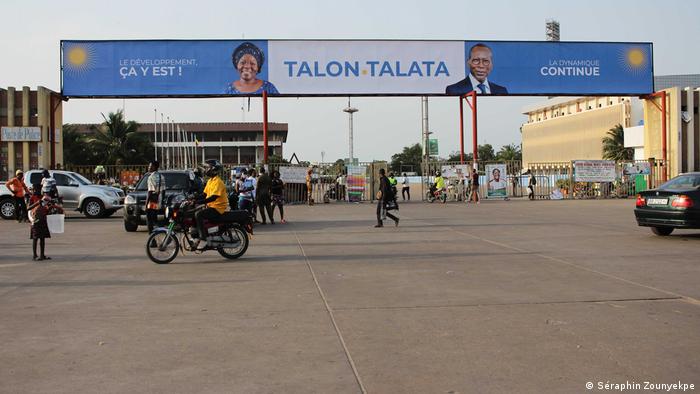 One image, though, dominates: that of the current president, Patrice Talon. Against a blue background, he and running mate Mariam Chabi Talata are visible to every one of Cotonou's 800,000 residents. Like the United States, the West African country nominates pairs to run for the presidency, and if Talon is reelected, Chabi Talata will be vice president. 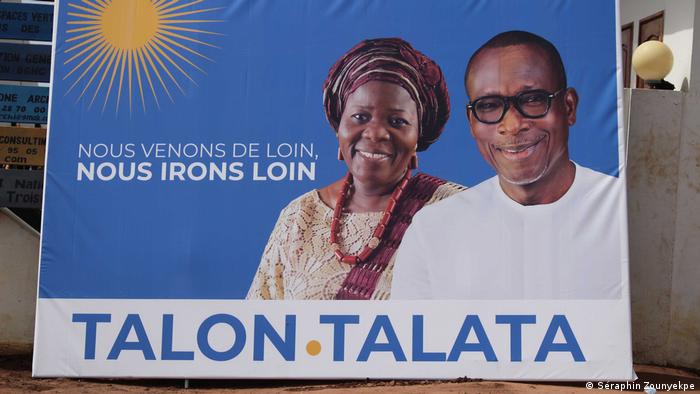 "We have come a long way, we will go far" is the pitch by Talon and his running mate

For Flora Agoudavi, this is a foregone conclusion. She and hundreds of other supporters have come to a campaign rally in front of the congress buildings on the coastal road Boulevarde de la Marina. They wave flags bearing their candidate's face, and wait patiently for his address.

"When the president kicks off his campaign, I have to be there," she said.

For Talon's next term, Agoudavi hopes that women will get increased access to smaller loans.

"He should make it happen," she said. "That's why I'm giving him a second chance." A second term and broken promises

When Talon, a businessman, was elected in 2016, he hailed a change of governance in Benin, and pledged to achieve his campaign promises within five years. He said he would stand only for one term. But those words seem a distant memory, and a pragmatic approach of "we must finish what we started" has taken over.

In contrast to previous presidential elections, there is only a shortlist of candidates. Apart from Talon, just Corentin Kohoue and Alassane Soumanou are on the ballot. Both are largely unknown. In an interview with DW, Kohoue even referred to himself as a "surprise candidate." For comparison, 33 people stood for election in 2016, and 14 in 2011. Many, however, only garnered a few thousand votes. Patrice Talon on the campaign trail

That only three candidates are running is because of changes to the election system introduced in 2019. To be nominated as a candidate, each hopeful must gain the support of 10% of Benin's mayors and parliamentarians. In January, the national election commission rejected 17 potential candidates. This included well-known opposition figures like law professor Joel Aivo and Reckya Madougou, who was a minister under the previous president, Boni Yayi. Avio has been under arrest since the beginning of March — accused of financing terrorist activities. Other known opposition names live in exile in France or the United States.

That Kohoue and his running mate, Irene Agoss, have the necessary documentation to run for the presidency is only down to their political connections, Kohoue said.

"They are my brothers, with whom I happen to share the same opinions," he added. "I did tell them I want to run. Can you support me? One has to try."

It is not public knowledge who the supporters are. 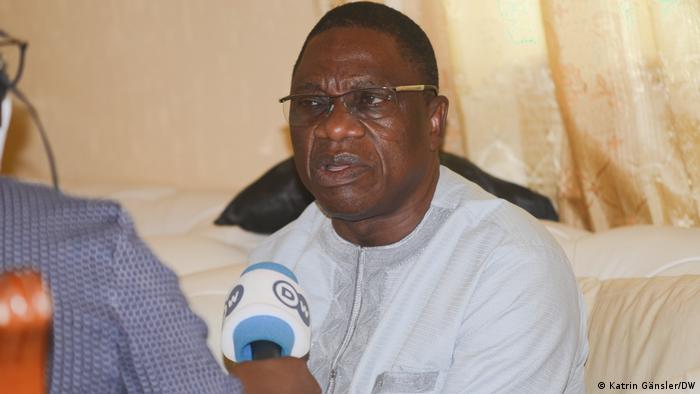 Corentin Kohoue is one of the few running against President Talon

This anonymity has caused concern within the opposition. It is unclear why well-known hopefuls did not gain enough support. Parts of civil society also criticised the reform for another reason: Since 2019, members of only two parties — the Bloc Republican and the Union Progressiste — have seats in the National Assembly. But the country has 14 registered political parties. And before Talon's reforms, there were 278 political alliances and parties.

Steve Kpoton, a lawyer and political analyst, called the patronage system "a very good reform" that provides a filter for a serious election.

"This also exists in other democratic countries, like France, Senegal and Mali," he said.

Kpoton said parliamentarians were free to support other candidates.

"This can happen when someone thinks certain ideas are needed in the presidential election," Kpoton said. "One can support someone in the name of democracy."

Yet Benin, once regarded as one of West Africa's stable democracies with a model constitution, faces uncertainty. According to the US government-funded NGO Freedom House, Benin is only "partly free." The country fell 17 places in one year on the World Press Freedom Index compiled by Reporters without Borders. The Economist's Democracy Index has seen Benin slide to place 102.

From democracy to authoritarianism?

Hans-Joachim Preuss, a representative of the Friedrich Ebert Foundation, described Benin's government as an "elected autocracy." Certain democratic institutions have been eroded in recent years.

"We have a parliament that consists of the president's allies. In the country's highest court, principally only loyalists of the president are represented. There are limits on press freedom, which means there are no checks and balances for the executive," Preuss said.

Voters such as Agoudavi, however, focus on the achievements of Talon's government. "He has built infrastructure and roads," she said.

The president has also been praised for his "different style of governing." Talon, who once wanted to be a pilot, was always close to the political elite. First and foremost though, he is a businessman who built up a business empire by exporting cotton. Steve Kpoton described his governing style as "pragmatic, fast and efficient."

And that appears to have convinced enough voters in Benin