The only remnant of the murdered Congolese independence leader, a gold tooth, was returned to his family during a ceremony in Brussels. His 1961 murder is a reminder of Belgium's brutal colonial history. 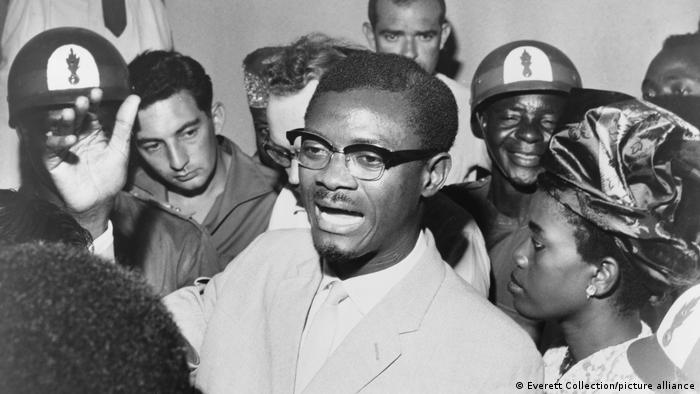 Belgian authorities returned the only known remains of assassinated Congolese leader Patrice Lumumba to his family on Monday.

A gold-capped tooth belonging to Lumumba, in a blue box, was handed over to his family members by Belgium's federal prosecutor at a private ceremony in Brussels.

A casket containing the tooth is set to be flown back to Congo, where it will be officially laid to rest at a memorial site.

Congo will then observe three days of "national mourning" from June 27 to 30, its 62nd anniversary of independence, to mark the burial ceremony.

Belgium's 'moral responsibility' for the killing

Lumumba, Congo's first prime minister, was murdered by firing squad in 1961. His government was overthrown after only three months in power.

His body is said to have been buried in a shallow grave, and then dug up on orders from Belgian officers, severed into pieces and dissolved in acid.

The gold-crowned tooth was all that remained. Gerard Soete, a Belgian police officer who oversaw the exhumation, later admitted to taking the tooth.

There had been a lengthy campaign to get Lumamba's remains reclaimed by his family.

In 2016, his family filed a complaint prompting Belgian officials to seize the tooth from the officer's family.

"It isn't normal that Belgians held on to the remains of one of the founding fathers of the Congolese nation for six decades," Belgian Prime Minister Alexander De Croo said in a speech on Monday.

"I would like, in the presence of his family, to present in my turn the apologies of the Belgian government," he said. "A man was murdered for his political convictions, his words, his ideals."

Belgium has also made other attempts at honoring the leader's legacy, including naming a square in Brussels after Lumumba.

Earlier this month, Belgium's King Philippe expressed his "deepest regrets'' for his country's abuses in its former African colony.

How NFT technology can be 'a tool for decolonization'

After their request to borrow a sculpture created by their ancestors was denied, a Congo-based artist collective found a different way to repatriate it.