After five months without a government, four Belgian political parties have reached an agreement to form a governming coalition. Belgium frequently faces division along linguistic and political lines. 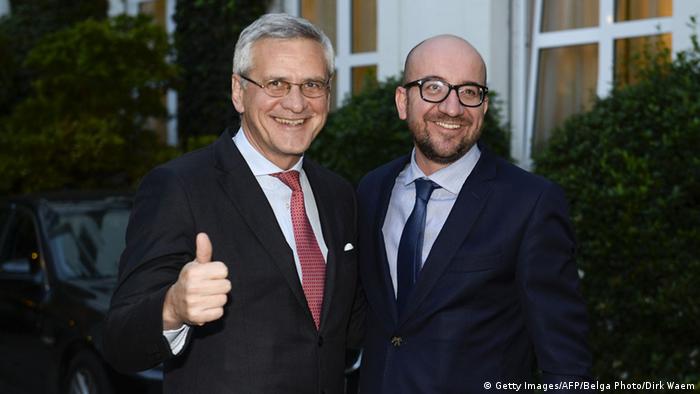 Belgium's primary center-right parties have reached an agreement to form a coalition government, ending a five-month period since parliamentary elections without a national government.

"All the partners suggested that I take over the responsibilities of prime minister," Michel said. Unusually for a Francophone politician in Belgium, Michel speaks excellent Flemish.

The agreement to install Michel as prime minster came after a marathon negotiating session ended on Tuesday with an agreement to lower taxes and raise the retirement age from 65 to 67 by 2030. Michel said the deals brokered on Tuesday "will balance Belgium's books by 2018."

Center-left out in Flanders-focused coalition

Michel will replace Elio Di Rupo, whose center-left Socialist Party has already complained that the agreement is too business-friendly.

Belgium held federal elections in May, but the nation had since been deadlocked on the formation of a new government. The country frequently faces division stemming from linguistic and political differences between the country's more conservative Flemish-speaking north, and the French-speaking south.

The governing coalition will be the first without Socialists in 26 years. It also includes the Flemish nationalist party New Flemish Alliance (N-VA), which advocates the secession of Belgium's Dutch-speaking north. Flanders' Christian Democrats (CD-V), and the Open Flemish Liberals and Democrats (VLD) make up the rest of the coalition. Prime Minister Michel's MR party, which won just under 10 percent of the votes in May, is the only coalition member from Wallonia, Francophone southern Belgium.

The N-VA, in Belgium's more populous and wealthier north, took more than 20 percent of the popular vote, making it the strongest single power in the country. In the past, its advocacy of secession had made other parties eschew the influential N-VA as a political partner, helping to explain the country's difficulties forging coalition governments.

Recent history has seen Belgium wait even longer to form government. In 2010, it took 18 months of negotiations in order to form a governing coalition.