Belarusian writer Svetlana Alexievich has voiced doubt that elections taking place in her country will be free and fair. The writer, who won a Nobel Prize for Literature this week, said Belarus was a "soft dictatorship." 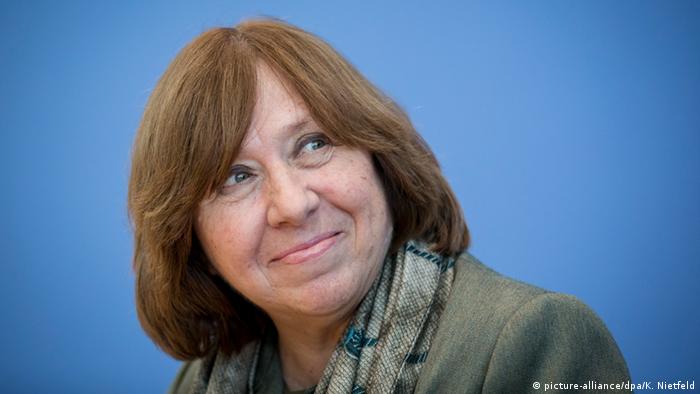 Nobel Literature Prize laureate Svetlana Alexeivich did not mince words in her indictment of Belarusian President Alexander Lukashenko on Saturday, claiming that little had changed since the days of the former USSR.

The writer said that it did not matter how people voted in Sunday's presidential elections, claiming that the result was a foregone conclusion.

"As Stalin once said, it's unimportant who votes or for whom, what matters is who counts the vote," she said, speaking through a translator in Berlin, at an event organized by her German publisher. "I don't think we expect any surprises and I think everyone has the feeling that what is going on in Russia and in Belarus will last a long time."

Alexeivich made her comments after EU sources said on Friday that Brussels was preparing to suspend sanctions against Lukashenko after he released the country's last political prisoners in August. Six opposition leaders were freed in the surprise move, including Mikola Statkevich, a former presidential candidate who was jailed in 2010.

The sanctions include travel bans and asset freezes against Lukashenko and around 170 other individuals and 14 groups imposed in January 2011 for alleged human rights violations.

Nevertheless, Belarus remains "a soft dictatorship," Alexeivich said. "Stalin's dictatorship is not the only model. There are lots of other variations."

Alexievich won the award for her work documenting the lives of people during the Soviet era and after, constructed from thousands of interviews.

Alexievich was also critical of Russian President Vladimir Putin, saying "one can no longer talk of democracy there."

"We had the naive view in the 90s that there would be immediate freedom" with the collapse of the Soviet Union, she said. "But for freedom one needs free people, and we don't have free people yet."

Hours after the Nobel prize was announced on Thursday, Lukashenko - who is standing against three virtual unknowns in the election - acknowledged the achievement and said he hoped the "award will serve our state and the Belarusian people." Although his comments lacked effusive praise for Alexeivich, the Nobel laureate said she found it "a bit odd."

"He eventually found the strength to bring himself to, even though he has a negative relationship with me because of what I say, and say about him," she said.