Asian stocks were mostly down on Tuesday as Chinese markets saw another session of volatility a day after the heaviest one-day losses in more than eight years. As Beijing said it would do more, European shares rebounded. 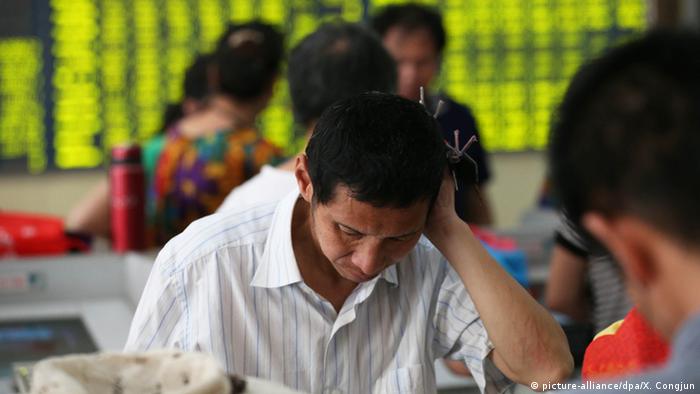 China's benchmark Shanghai stock index closed down 1.7 percent on Tuesday, slashing losses from earlier in the day but still defying government efforts to improve sentiment after a plunge on Monday.

In volatile trading, the Shanghai Composite Index fell as much as 5 percent and rose almost 1 percent during the day, before closing at 3,663 points. Its 8.48 percent plummet on Monday was the biggest single-day loss in eight years.

The Shenzhen Composite Index, which tracks stocks on China's second exchange, ended down 2.24 percent at 2,111 points.

European stocks also bounced back after a day of losses on concers over the health of the Chinese economy. In early trading in Germany, the blue-chip Dax index gained 0.43 percent to 11,104 points. The FTSEurofirst 300 of top European stocks was up 0.4 percent at 1,536 points and the broader STOXX Europe 600 index also edged up by 0.4 percent.

"The market has been preoccupied with uncertainties related to China in the last couple of days, but those concerns are taking a backseat today," said Gerhard Schwarz, head of equity strategy at Baader Bank in Munich.

Tuesday's losses in Asia came despite assurances from Beijing that it will unleash more cash to provide stability to jittery share markets.

The People's Bank of China said on Tuesday it would inject 50 billion yuan ($8.05 billion) into money markets in its biggest liquidity boost since July 7, near the trough of the last market sell-off.

Worries over the world's second largest economy have caused Chinese stocks to plunge more than 8 percent, the biggest one-day drop in more than eight years. Investors fear a sharp economic slowdown could be looming. (27.07.2015)

Sieren's China: No freaking out

Many observers were worried about the Chinese real estate market, but after a period of euphoria and depression the sector is finally becoming more stable, says DW's Frank Sieren. (24.07.2015)

Chinese stocks rebounded for a second day as investors found respite in Beijing's heavy-handed market intervention that ended the past month's volatility. But it was also criticized for undermining market reform efforts. (10.07.2015)

Beijing's credibility 'on the line' over stock market volatility

Chinese stocks have rebounded following government moves to halt a sell-off that has knocked nearly 30 percent off Chinese shares since June 12. But what does this volatility mean for Beijing? DW spoke to Sandra Heep. (09.07.2015)

The central bank also said in a statement before the stock market opened that it would use "various monetary tools" to maintain "appropriate levels of liquidity," a signal that the further monetary easing that many analysts have predicted could be in store.

"The worst time has passed but we think there is a final leg for this correction," Steve Yang, strategist at UBS Group AG, said. "Fundamentally there is no reason for funds to come in and buy aggressively."

But Castor Pang, head of research at Core-Pacific Yamaichi Hong Kong, warned the latest comments might not be enough without concrete action.

"The government's current intervention was not able to stop the market's slide and only delayed the decline," he said.

Monday's dramatic slide shattered three weeks of relative calm for Chinese equities, secured through heavy government intervention in which authorities pumped liquidity into the market while effectively barring many investors from selling.

Despite a slowing economy, China's main stock indexes had more than doubled over the year to mid-June, when a sudden swoon saw shares lose more than 30 percent of their value in a matter of weeks.

Markets finally began stabilising in the second week of July, with a rebound of more than 15 percent prior to Monday's slide.

Bad timing for testing the waters

The rapid sell-off on Monday may have been partly due to authorities testing the water for withdrawing some of that heavy-handed support.

Three people in the banking industry with direct knowledge told Reuters on Monday that the state-run margin lender had returned ahead of schedule some of the funds it borrowed from commercial banks to stabilise the stock market.

"The authorities picked an inopportune time to float a trial balloon about scaling back market support operations," wrote Tim Condon, head of research Asia for ING Bank in Singapore, in a note on Tuesday. "Lesson learned: sentiment manifestly remains fragile."

The renewed turbulence also raised questions about the long-term viability of Beijing's strategy of intervening to control its markets.

"The government's intervention in the market may work in the short-term, but will nonetheless create longer-term issues," said Bernard Aw, market strategist at IG in Singapore. "So in that sense, a government bent on control most of the time and free markets simply cannot meet each other halfway."

But while recent stock market weakness will have stung for many Chinese retail investors and companies, the relatively low rate of stock ownership by households and a disconnect between valuations and economic fundamentals mean the impact on the economy is likely to be less than it would be in other markets.

China's top economic planner described the stock market turbulence as "abnormal", but said he was optimistic on the outlook for the economy in the second half of the year.

"The fundamentals of China's economy are stabilising and turning better," Li Pumin, secretary general of the National Development and Reform Commission, told a briefing in Beijing. "So we have the foundation and necessary means to keep the healthy development of capital markets including the stock market."

China's central bank has cut interest rates three times this year, in a bid to support an economy headed for its poorest performance in a quarter of a century. Many economists expect further policy easing in coming months.