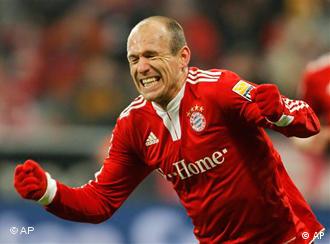 The Dutch player Arjen Robben was named Footballer of the Year 2009-2010 by German sports magazine Kicker on Sunday. His boss at Bayern Munich and fellow Dutchman, Louis van Gaal, was voted best coach.

26-year-old Robben saw off three clubmates in the annual vote by top sports journalists. He was outstanding in Bayern Munich's success last season, helping them win the domestic double, and reach the Champions' League final, losing to Inter Milan.

"This is a great honor, a reward for a super season," said Robben. "We only missed out in one game, otherwise we would have won everything."

Robben was a major influence on the successful Dutch World Cup team, which reached the final for the first time ever this summer, losing 1-0 to Spain.

Robben is due to miss the next two months due to a thigh injury.

Bayern Munich has blamed the Dutch football association for an injury that has ruled out star winger Arjen Robben for two months. The club claims Robben should not have played for his country after picking up an injury (04.08.2010)

While German World Cup stars seem to be this summer’s hottest transfer targets, a number of foreign stars currently plying their trade in the Bundesliga are among those whom Europe’s top clubs are hoping to entice away. (24.07.2010)

Bayern favor continuity as they prepare for title defense

German champions Bayern Munich are looking to defend their title by maintaining the core of a squad that almost completed an unprecedented treble last season. However, this doesn't mean they're not looking for recruits. (28.07.2010)