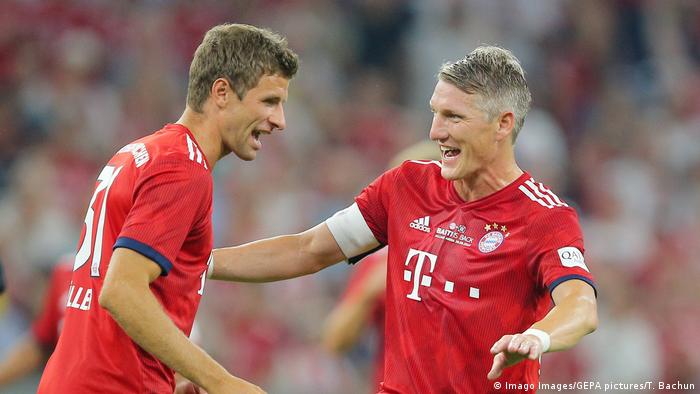 The fallout from Bayern Munich's 5-1 humbling at the hands of Eintracht Frankfurt on Saturday has seen the club part ways with Niko Kovac .

While the club were able to take that decisive step on Sunday, they could do nothing about the words of one of their playing icons earlier on in the day. Schweinsteiger's comments to tabloid Bild am Sonntag were broadly diplomatic but also somewhat revealing, particularly when discussing his former Bayern and Germany teammate Thomas Müller, whose happiness with life under Kovac is the subject of some speculation.

"His situation is different to mine back then [when Schweinsteiger left Bayern for Manchester United]. I was playing every game, then van Gaal contacted me, I wanted to try something new. Thomas is often on the bench lately, a change of air can be good at the end of a career - that's how it was with me. Thomas still has great quality," the Chicago Fire player, who recently announced his impending retirement, said.

Müller has recently had a run of starts for Bayern after expressing his frustration at being benched for much of the early part of the campaign but has still yet to score a Bundesliga goal this season. The former World Cup Golden Boot winner has long been a rumored target for Manchester United, with some suggesting a move could still happen in January. Schweinsteiger claimed that Müller "would be an asset for Man United" and confirmed that Louis van Gaal was interested in the Bayern man when he was in charge at Old Trafford. 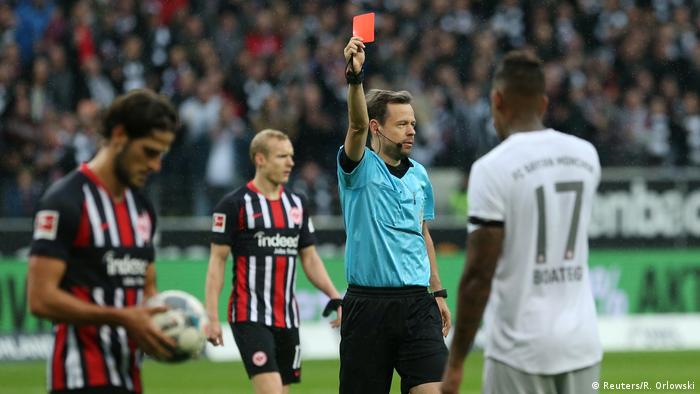 Jerome Boateng was sent off in Bayern's defeat

"Van Gaal really wanted him, always asked me, 'What's your friend Thomas doing?' He would have done us good at United back then. But Thomas was a bit younger, he did not want to leave Munich. Maybe that has changed."

Schweinsteiger, who will soon start working as a pundit on German TV, added that he has not ruled out a coaching role in the future, before revealing that one of his former bosses had taken an interest in the club.

Jose Mourinho is one of the names touted as a Kovac replacement, particularly given the Portuguese boss is currently out of work. While he stopped short of saying the former Chelsea, Real Madrid and Manchester United coach would be a good fit on Säbener Strasse, Schweinsteiger said Mourinho had laid the groundwork for a move to Germany.

"I can imagine Mourinho in Germany. I remember he was always asking me about Bayern and the Bundesliga. During our away games, there was always Bundesliga on TV. He really knew every single player, even from the smaller teams. He was also learning German."

Another of Schweinsteiger's former teammates, Oliver Kahn, will soon be joining the Bayern board, in order to be groomed as the successor to Karl-Hienz Rummenigge as CEO, while Uli Hoeness will step down as president later this month.

"For us as well as for Uli Hoeness, the farewell is not easy," said Schweinsteiger. "After all, we all know Bayern only with Uli Hoeness. But with Oli Kahn, the right man comes at exactly the right time for the club. That certainly makes the upheaval in the front office easier."

With the German champions currently somewhere between crisis and flux, that upheaval won't be restricted to the front office.

Niko Kovac oversaw Bayern Munich's heaviest league defeat in a decade and the champions are four points off the pace. It's not all his fault but he's under pressure and doing himself no favors, thinks DW's Matt Pearson. (02.11.2019)

Bochum were six minutes away from pulling off the mother of all upsets, but Bayern Munich had other ideas. Serge Gnabry and Thomas Müller struck late as Niko Kovac's side stayed in the cup by the skin of their teeth. (29.10.2019)

The former World Cup winner and Bayern Munich captain has called time on an illustrious career. German national team coach Joachim Löw has paid tribute to 'one of Germany's greatest ever players.' (08.10.2019)