Antoni Gaudi's church, which still isn't finished a century after construction began, has received its formal planning permit. The part-Gothic, part-art nouveau landmark is already one of Spain's most visited sites. La Sagrada Familia Basilica, which has been under construction in Spain's northeastern city of Barcelona for the last 137 years, has finally been granted a building permit.

Barcelona's City Council gave planning consent on Friday to allow the project to be completed by 2026, the centenary of chief architect Antoni Gaudi's death.

City officials say a foundation devoted to completing and preserving the basilica has paid €4.6 million ($5.2 million) for the permit, allowing it to finish construction to a maximum height of 172.5 meters (566 feet) and a ground surface of 41,000 square meters (around 440,000 square feet).

The agreement between the city and La Sagrada Familia foundation puts an end to "a historical anomaly in our city," said Barcelona official Janet Sanz.

Spanish authorities realized in 2016 that the unfinished church had been operating illegally for over a century. The basilica's first stone was laid in 1882, but there is no record showing a building permit was ever granted or rejected.

According to the committee in charge of finishing construction, Gaudi had asked the town hall of Sant Marti, a village now absorbed into Barcelona, for a building permit but never got an answer. 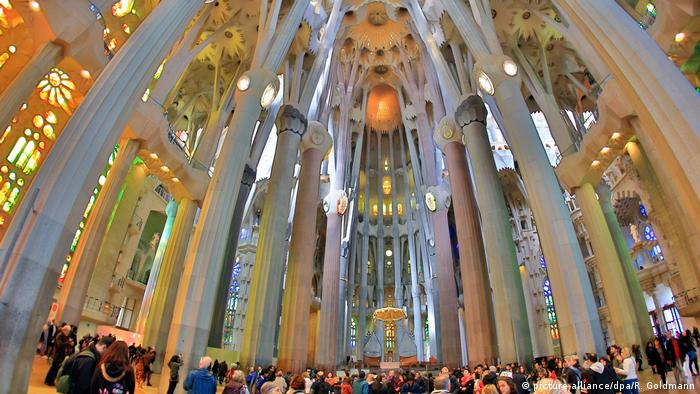 The Barcelona government estimates 20 million tourists stand outside to marvel at the bell towers; Gaudi envisioned 12, one for each of Christ's disciples, but they may never all be built.

When completed, work on one of the central towers will make La Sagrada Familia the tallest religious structure in Europe, according to the builders.

A fervent Catholic, he dedicated much of his professional life to the huge church project, for which he incorporated elements of Christian symbolism along with the organic forms he often employed.

Gaudi died in 1926 after being struck by a tram when just one facade of the church was complete.

Ongoing construction work is based on the architect's plaster models, and photos and publications of his original drawings, which were destroyed in a 1930s fire, according to the foundation.

Catalan police said a bomb scare near Barcelona's landmark Sagrada Familia church was a false alarm. They had earlier cordoned off the cathedral and nearby businesses. (12.09.2017)