Three people have been detained in connection with August's terror attacks in Barcelona and Cambrils. The arrests were made in the French regions of Gard and Tarn, following a joint French and Spanish police operation. 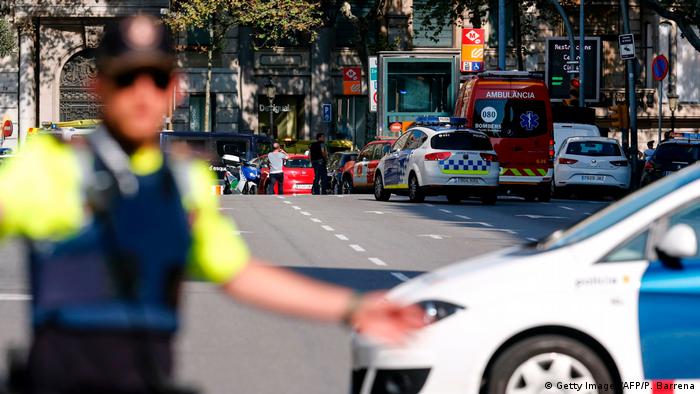 Spanish and French authorities detained three people on Tuesday in connection with last summer's terrorist attacks in Barcelona and Cambrils, which left 16 people dead and around 130 injured.

The French prosecutor said the suspects had been hiding in the Gard and Tam regions in southwestern France.

The three are being held as part of an inquiry into "attempted murder as part of a terrorist enterprise" and "criminal terrorist association," the prosecutor said.

Their identities and nationalities have not been disclosed, while formal charges are still pending.

The individuals are believed to have links to Moroccan national Driss Oukabir, who is suspected of having rented the van used in the rampage on Barcelona's famous Las Ramblas boulevard on August 17.

Oukabir, who was arrested shortly after the attack, is currently in Spanish police custody. He faces charges of murder as well as membership of a terror organization.

A day after the attack in the Catalan capital, police shot dead five people in the nearby seaside town of Cambrils. The men were stopped after they drove their van at pedestrians and officers, killing one woman.

Spanish police believe that a 12-man terror cell was behind the two attacks.

France's top anti-terrorism prosecutor, Francois Molins, revealed in late August that several of the suspects had been in the Paris region in the days leading up to the attacks. Molins said French authorities were trying to establish whether the attackers had been in contact with other persons of interest in France.

Donald Trump: Democrats 'cheated' in US presidential election 0m ago