Figures from the football world and beyond have weighed in to support Barcelona player Dani Alves after his stoic riposte to a racist banana taunt. There was a blizzard of backing from all quarters on social media. 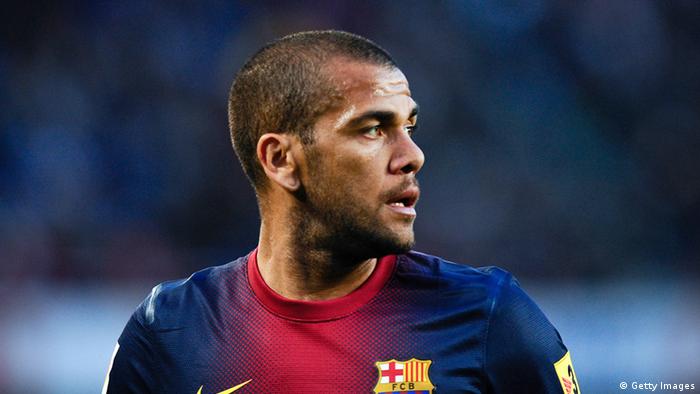 On Monday, sporting and political leaders joined footballers in giving their response to the racist incident at Villareal's El Madrigal stadium.

Brazilian President Dilma Roussef and FIFA President Sepp Blatter were among those lending their support to Alves, who had a banana thrown at him while taking a corner kick against Villareal.

In a matter-of-fact response, the player picked up the banana and took a bite before throwing it away and going on to help his team to a 3-2 win. Barcelona had been trailing 1-0.

The 30-year-old Brazil international won praise for his reaction, notably in his home country, where Rouseff took to Twitter to voice her support.

"The player Dani Alves gave a daring and strong response to racism in sports," said Roussef in a series of Twitter messages, adding that such racism had become "unfortunately common."

FIFA President Blatter expressed regret at the incident, saying that there would be no place for such actions at the forthcoming World Cup in Brazil.

Villareal, which itself might face a sanction over the incident, sent a message after the match condemning the actions of the spectator, who was issued with a lifetime ban.

"Pity to see an ignoramus capable of such a lamentable act. There is no room for it in sport and even less in our club."

The throwing of bananas at players of black origin has long been a taunt used by racist fans, with Spanish soccer having one of the worst records for such incidents in Western Europe.

Alves has often been targeted with "monkey chanting" and in January 2013 described the fight against racism in football as "a lost cause."

Monday, however, saw an outpouring of support from Alves' fellow players, with his Brazil and Barcelona teammate Neymar #link:http://instagram.com/p/nT115JRtuI/:posting a photograph of himself on Instagram# holding a peeled banana alongside his two-year-old son carrying a banana cuddly toy.

"We are all monkeys, we are all the same, say no to racism," said Neymar's post, tagged "#weareallmonkeys" among other hashtags. 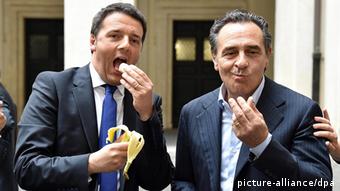 That message was followed by a succession of social media posts from other professional footballers, including Chelsea's Brazilian stars Oscar, David Luiz and Willian, showed their solidarity in a similar fashion. Manchester City's Argentine star Sergio Aguero, meanwhile, #link:https://twitter.com/aguerosergiokun/status/460743157039108096:tweeted a picture# of himself and Brazilian five-time female world player of the year, Marta, eating the fruit.

Even Italian Prime Minister Matteo Renzi (picture inset, left) - himself a huge football fan - got in on the act, pointedly sharing a banana with Italy national coach Cesare Prandelli (right) in a photo shoot.

What do you think of Dani Alves' response? Is humor sometimes an appropriate response to racism on the pitch? Give us your thoughts in the comments section below...