Sepp Blatter has used his 80th birthday to give his first interview since his successor was elected. The banned former FIFA boss spoke about allegations against him, a recent health scare, and Gianni Infantino. 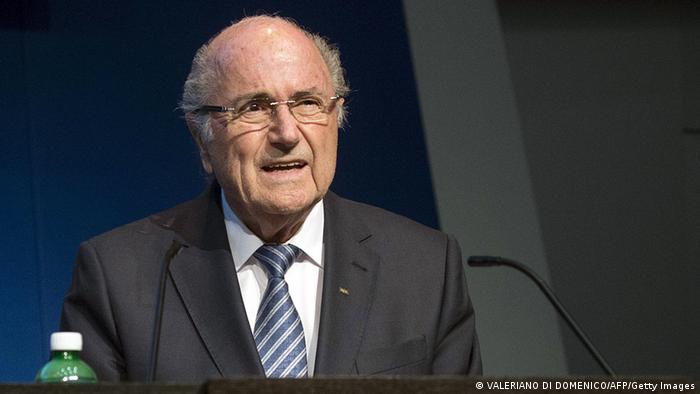 In an interview published in Thursday's edition of the Swiss newspaper "Blick," Blatter expressed confidence that new FIFA President Gianni Infantino could overcome the challenges facing football's world governing body, which has been racked by arrests, indictments, and allegations of wrongdoing for most of the past year.

"He has the credit that comes with being the new guy," Blatter said. "His job is difficult, but he can do it."

Blatter also indicated that although both he and Infantino come from the Swiss canton of Valais, they had never been particularly close, although they have known each other for years. He also said he didn't think much of Infantino's proposal to increase the number of teams in the World Cup finals to 40 teams.

"We should stay with 32 teams at the World Cup," he said.

Asked about what influence he might have had on the election for the new FIFA president, Blatter said he had been consulted by "not some, but many" of the 2007 delegates who were eligible to vote at the February 26 Congress in Zurich. However, asked whether he had endorsed any of the candidates, he played it coy.

"I remained true to the principle of Swiss nationality," he said, in an apparent reference to the country's long-standing foreign policy of neutrality.

Despite the arrests of many former senior FIFA officials on corruption allegations, Blatter said he was proud of the organization, because "despite the turbulence in the executive suite, it always worked. All of the competitions successfully took place, all courses were carried out." He also compared FIFA to a "functioning democracy."

"It doesn't all fall apart just because you have had a change in leadership," he said.

At the same time, he said that it would be a challenge to "solve the problem with the United States." This was a clear reference to an ongoing corruption investigation led by the US Justice Department, which has already led to numerous arrests by the Swiss authorities and many more indictments.

Asked about life-threatening illness that landed him in the intensive care unit of Zurich hospital late last year, Blatter said it had changed the way he looks at life, and that after a spending four decades at FIFA, now the most important things to him were his health and his loved ones.

Blatter also reiterated his denial of any wrongdoing, particularly in connection with a dubious payment of two million Swiss francs (1.8 million euros, $2 million) to UEFA president Michel Platini, which led to both men being banned from football.

"We had a verbal contract, which is valid," Blatter said, before adding that the payment had been approved by all of the relevant bodies at FIFA.

Asked what goals he had left to pursue as he turned 80, Blatter said the first thing he was looking forward to was being acquitted by the Court of Arbitration for Sport in Lausanne.

"This should happen by the end of April."