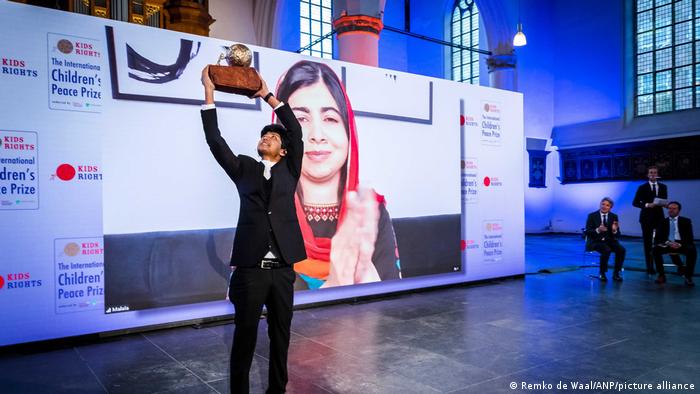 A Bangladeshi teenager on Friday received a prestigious global children's award for his work in combating cyberbullying in his country.

Sadat Rahman, 17, was awarded the 2020 International Children's Peace Prize for developing a mobile app in his western district of Narail in Bangladesh that provides education about online bullying and helps teenagers report and cases.

"The fight against cyberbullying is like a war, and in this war, I am a warrior," Rahman said in an impassioned speech after he was handed the award at a ceremony in The Hague, which was live-streamed due to coronavirus restrictions.

"If everybody keeps supporting me, then together we will win this battle against cyberbullying," he said. The teen vowed to keep fighting online abuse involving children until it is eradicated.

'Model for the world'

Rahman came up with the idea of the "Cyber Teens" mobile app after hearing the story of a 15-year-old girl who experienced cyberbullying and ultimately died by suicide.

The app puts children in touch with a team of youngsters, including Rahman, who then liaise with local police and social workers to help teens too scared or embarrassed to report acts of cyberbullying and cybercrime.

The app also gives helpful tips about online behavior and how to avoid sexual predators.

Rahman said he plans to use the money to further develop the app across Bangladesh "and hopefully to serve as a model for the rest of the world."

Siena Castellon, an 18-year-old Irish activist who created a website to help pupils with autism and severe learning disabilities, was one of the three finalists for the award.

The other finalist was Ivanna Ortega Serret, a 12-year-old Mexican girl who raised almost a million dollars and 67,000 signatures for a petition to help fight water pollution and clean up the Madin dam, northwest of Mexico City.

The International Children's Peace Prize is an annual prize run by the Netherlands-based KidsRights foundation. Its past winners include Malala Yousafzai, Swedish climate activist Greta Thunberg, and the students who organized the March For Our Lives after the deadly mass shooting in Parkland, Florida.

Cyberbullying, fear of missing out, anxiety: how badly does social media affect our mental health?

Three million clicks and counting ... There has been a wave of support in response to a simple video posted online by a German teenager who is asking his peers to stand up to bullying. DW takes a look.