The health of jailed 74-year-old Khaleda Zia's was deteriorating. The government has finally agreed to her receiving treatment outside of prison, but it's not exactly what her family wanted. 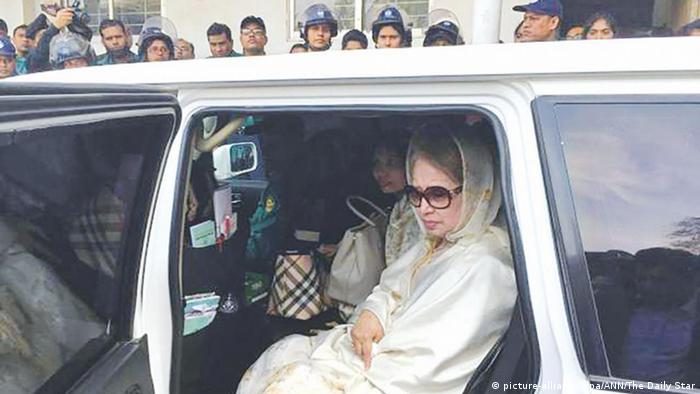 Bangladesh opposition leader Khaleda Zia will be released from jail for six months on "humanitarian grounds," allowing her to seek treatment for a medical condition, said a government minister on Tuesday.

The 74-year-old, who twice served as Bangladesh's Prime Minister, has been imprisoned since February 2018, serving a 17-year sentence on corruption charges — her party say the lawsuits were politically motivated. She suffers from arthritis and her health has been deteriorating.

Conditions for her release state that "she remains in her Dhaka residence to receive treatment and does not go abroad," said Anisul Haq, the country's law and justice minister, who gave details of her release, on orders of Prime Minister Sheikh Hasina.

She will be able to "take medical treatment at any hospital in the country" but she will not be able to travel abroad.

Her family had earlier unsuccessfully appealed to the High Court, seeking permission for her to be flown to London for medical treatment.

'Happy with the decision'

"Khaled Zia has been released following an application from her family. BNP hasn't applied for her release. However, we are taking it positively: she should have been released earlier because she was in jail due to political reasons, not for committing any crime," commented BNP leader Amir Khasru Mahmud Chowdhury.

Khaleda's brother, Shamim Iskander, thanked the government for its decision and said: "We're very happy with the decision," reported Reuters.

Zia was convicted in February 2018 on charges of misusing her power by embezzling some $250,000 in donations meant for an orphanage trust. She was later convicted in another corruption case.

She belongs to one of Bangladesh's political dynasties, with current leader Hasina belonging to another. Their families have dominated Bangladeshi politics since its independence in 1971.

The Ministry of Home Affairs will issue a notification for her release. It was not immediately clear exactly when she would be freed.

Bangladesh's former Prime Minister Khaleda Zia has been in jail in connection with several cases filed against her. Now, her allies are looking for a political negotiation to free their leader. (18.10.2019)

Opposition leader and former Prime Minister Khaleda Zia was given an additional seven-year prison sentence on corruption charges. Her supporters reject the graft charges, saying they are politically motivated. (29.10.2018)