Bangladesh seeks answers after deadly collapse | Asia| An in-depth look at news from across the continent | DW | 29.04.2013

Hundreds of people lost their lives when a building in Dhaka collapsed last week. Among the people who died, many were textile workers. Illegal practices to construct buildings are a part of everyday life in Bangladesh. 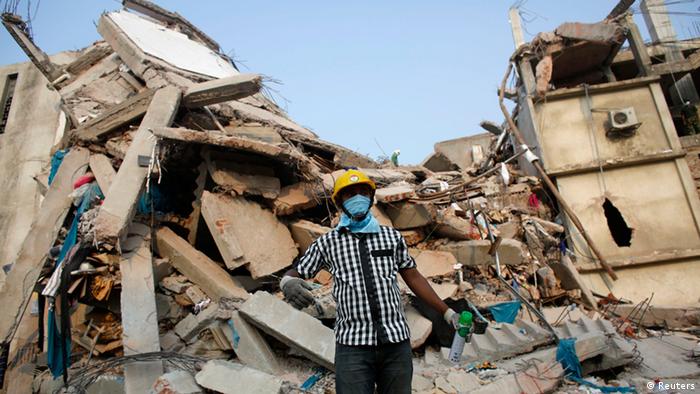 The disaster happened when an eight-storey block in Savar, an industrial suburb of Bangladesh's capital, Dhaka, collapsed.

The building, named "Rana Plaza," was owned by Mohammed Sohel Rana, a politician of the ruling Awami League party, who was arrested on Sunday as he was trying to flee to India.

The building housed a private bank, shops, offices and several garment factories. The clothing producers primarily made items for western brands. Its clients are companies from Germany, UK and Spain. Companies from France, Italy and the USA are currently looking into the matter and verifying if they had commissioned the factories with orders.

The collapse of the building is the latest in the series of mishaps in Bangladesh textile factories, says Brad Adams from the human rights organization Human Rights Watch. He told the press "The government, local factory owners, and the international garment industry pay workers among the world's lowest wages, but didn't have the decency to ensure safe conditions for the people who put clothes on the backs of people all over the world." According to estimates, more than 500 workers have lost their lives over the last three years in the garment factories of Bangladesh. 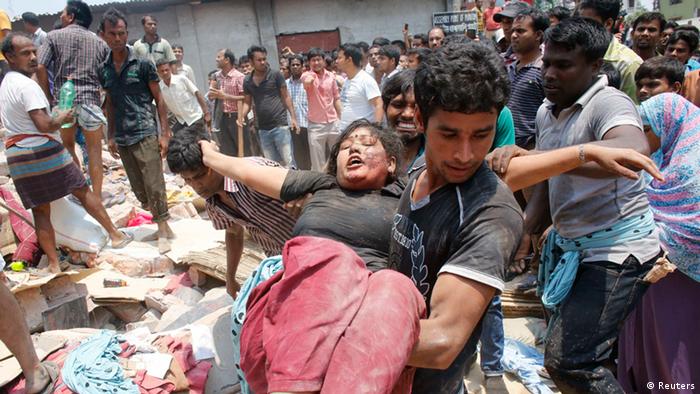 The accident in Savar shows that a lot of these accidents can be avoided. Two days before the accident, an officer from the municipality established that six supporting pillars of the building had cracks in them. The authorities ordered the tenants to evacuate the building. The owner of the building intervened and gave assurances that the building was in perfect condition. He personally asked the women workers to resume their shifts in the factory, said a DW correspondent. Soon after this, the building collapsed.

After tragedy struck, rescue workers managed to save 2,000 workers. But, the help came too late for 381 people who were found dead under the rubble. The rescue workers have now given up their search for survivors and are looking for dead bodies while dislodging the debris using heavy machinery. According to official estimates, 2,500 people have been accounted for. Bystanders feared that there were about 6,000 people in the building at the time the accident occurred. Because textile companies often hire more people than they officially report, there are so far no certain figures.

Furthermore, it was constructed on a piece of land where there has once been a pond. Experts believe that the unstable ground could have been a reason for the catastrophe. Other factors could have been the use of inferior quality of construction material and possibly even the heavy weight of the stitching machines on the top floors. 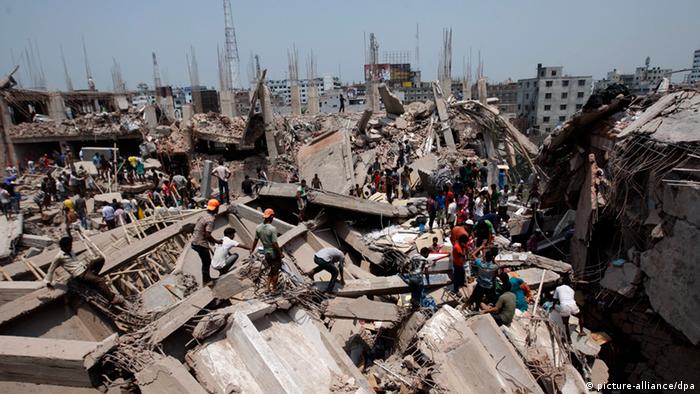 It is a known fact that such illegal practices are a part of everyday life in Bangladesh. Construction and safety precautions are often ignored. Electric cables commonly lie around or simply hang from ceilings, posing a threat. In order to save money, foundations are not constructed deep enough. The buildings are often used in an improper manner. In cases where the shoddy work comes to light during building inspections, the officers investigating the matter are either intimidated or simply bribed. The result: Buildings frequently collapse or catch fire.

Professor ASM Maksud Kamal, national adviser on tsunami, cyclone and earthquake risk of the Comprehensive Disaster Management Programme (CDMP), told DW that every fifth multi-storey building of the 360,000 in Dhaka posed a risk and could collapse any time. "There are 135,000 buildings that have classified as risky and pose a threat," said Kamal. "The buildings are not constructed as per rules and regulations."

The authorities now need to answer some important questions. For example, how was it possible that the owner could demand that the workers go back to their shifts despite the fact that cracks had appeared in the building? How was it that a politician's words were more important than the warning of the authorities? Why weren't standard government building regulations implemented? Why didn't the authorities take action against the illegal constructions? So far, there are no answers.

The fact that the building owner Mohammed Sohel Rana belonged to the ruling party makes the matter even more controversial. Brad Adams from the HRW determined that many factory owners in Bangladesh are politicians and belong to one of the political parties. More than 10 percent of the members of parliament have ownership stakes in garment factories.

Human Rights Watch knows of no cases in which the Bangladeshi government has ever prosecuted a factory owner over the deaths of workers.

Rights activists have blamed both national and international companies for the deaths of 110 workers in a Bangladeshi garment factory which caught fire on the weekend. (26.11.2012)