Backstage in the Berliner Philharmonie

An unforgettable evening of classical music and a German history lesson to boot: Berlin 24/7 columnist Gero Schliess visits the Berliner Philharmonie and has a beer backstage with Veteran violist Walter Küssner. 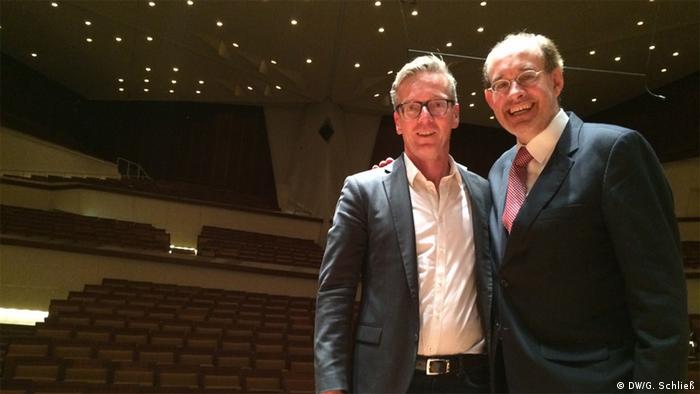 It all began with a concert called "Classic Meets Jazz" in the chamber music hall of the Berliner Philharmonie. Headlining the ensemble were musicians from the Berlin Philharmonic, who were to play works by Duke Ellington and Jacques Loussier.

Ten musicians sat on the stage of the Kammermusiksaal.

On this evening, among the members of the ensemble was violist Walter Küssner. After the applause and cheers and a brief handshake, I met up with Küssner over a pint. We know each other - a friend of a friend - and wanted to talk about a new project. But something else happened.

Instead of grabbing a beer in the cafeteria of the venue, we head to the large concert hall, which tonight is empty. The lights are up just for us. Walter Küssner takes me up on stage, where the legendary Herbert von Karajan once conducted.

While Küssner has often sat here, for me, the view out onto the wide sweep of empty seat usually filled with music fans is breathtaking. Küssner then unpacks his viola and begins to play whatever comes to mind. And then he begins to tell a story.

Even as a child, Küssner would tell people, "a bit full of myself," that he wanted to be a member of the Berlin Philharmonic. It was only after he finished his studies in Dusseldorf, New York and St. Louis, that it came to fruition.

After a stopover with the Symphonieorchester des Bayerischen Rundfunks, the southern German public broadcaster, he was invited to Berlin in 1988 for a probationary period of rehearsals. 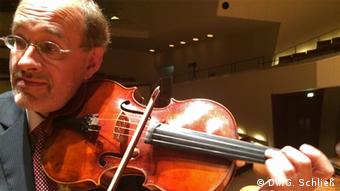 Küssner played a private concert in the empty hall

"After two weeks, it was clear that I never wanted to leave." After nearly 30 years, Küssner's excitement is still contagious. "I can't imagine any greater happiness than I feel from being able to play with this orchestra," he said, eyes shining.

It's not only that his colleagues play so unbelievably well. Everything around him just clicks. "It's a dream fulfilled!"

Getting steamed up with excitement

The beginning, however, was a bit disappointing. Küssner was hardly paid any mind by the elderly and ill conductor Herbert von Karajan.

He refrained from the obligatory preliminaries with the "new" players and brushed Küssner aside: "Oh, he plays well? Then I don't need to listen to him." Only once was Küssner noticed by Karajan, and only involuntarily, when he began to play in the midst of a concert during intermission. "Suddenly all heads turned toward me and I was so excited, I fogged up my own glasses."

It was something else entirely when Küssner began to work under Karajan's successor, Claudio Abbado, who Küssner calls, "the conductor of my life." Abbado was notoriously shoddy at rehearsals, yet musicians and audiences credit him with many "goose bump moments." 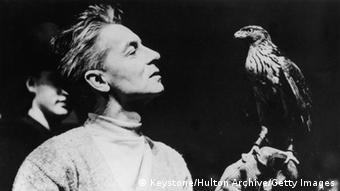 Simon Rattle, the successor to Abbado and current conductor, receives accolades from Küssner for his "fascinating eloquence and intelligence." While Abbado trusted inspiration to come during concerts, Rattle has a plan for everything.

Whoever stands on stage in the Berliner Philharmonie, however, will quickly realize that many fascinating things are not limited to the orchestra and conductor, but come from the hall itself.

The orchestra's unique sound - called "Klang" in German - fills the hall. "It influences the way one plays," Küssner said. The warm and powerful sound associated with Berlin would be nothing were it not for Scharoun's building. And that helps to make the myth of the Berlin Philharmonic.

After Küssner is done telling his musical tales, we go backstage and into the cafeteria, where kitchen counters and instrument cases are scattered about, creating a home-like atmosphere. Today we are alone here, with only a worker from the kitchen who, just before the end of his shift, puts a couple of beers on our table. 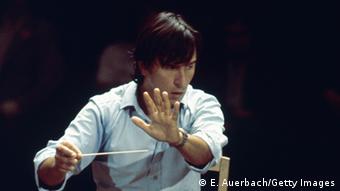 The orchestra's Nazi past

Behind, pictures from earlier days and venues hang on the walls. Among them is the Titania Palast, a traditional cinema where the Berlin Philharmonic was able to hold concerts after World War II, since the Philharmonie had been destroyed.

They are a good entry into a dialogue with Küssner about his side job as archivist for the Berlin Philharmonic. As part of that role, he came across the history of the orchestra and its position during the National Socialist era; the orchestra was under the direction of then Propaganda Minister Goebbels. Privileges and financial security came along with that position, though it later compromised the orchestra.

"The Berlin Philharmonic was a propaganda institution for the propaganda ministry," says Küssner.

All of this history is minutely detailed in a book written in German by Misha Asta, which she wrote on Küssner's suggestion: "Das Reichsorchester." The book, which was published in 2007, brought not only friends to Küssner. It also, in his view, is something that the orchestra profited from immensely. The Berliners voluntarily revealed their history, and that much earlier than others. Perhaps that is likewise a part of the myth of the orchestra: to pull itself up out of a crisis and in the end, come out stronger.

A season of revolution: The Beethovenfest 2016

"Revolutions" is the motto of the Beethovenfest, a musical extravaganza held this fall in the composer's city of birth. Meanwhile, Bonn is racing to renovate its concert hall before the Beethoven anniversary year 2020. (07.09.2016)

Berlin 24/7: news from the capital

In our weekly column "Berlin 24/7“, correspondent Gero Schließ reports from the German capital, informing our international audience about life in Berlin--everything from politics to culture. (07.09.2016)

Musicians from Ukraine have founded an exile orchestra in Germany. They are now performing classical works at the Berliner Philharmonie.

In the DW Festival Concert (DWFC) series, DW presents special concerts with which the Berlin Philharmonic emerged from the pandemic lockdown. Tune in!

The famed British conductor, who was long at the head of the Berlin Philharmonic, has now been honored with one of Germany's highest awards.