A prize-winning documentary project, now available as a DVD-ROM, explores the history of the German Democratic Republic through the eyes of those who lived it. 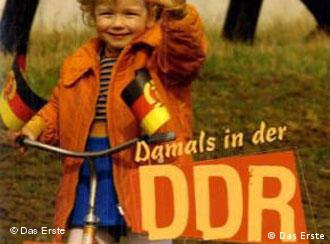 Back in the GDR: personal destinies against the backdrop of a grand historical narrative

When the German television documentary series Damals in der DDR ("Back in the GDR") received the Adolf Grimme Prize in 2005, the jury of the most prestigious German television award said that the documentary helped them "understand better what was so characteristic about the German Democratic Republic -- if a state can at all be said to have a characteristic rather than manifold facets. The films equally show us the poetry of the heart and the prose of the relations."

Now, the four-part documentary about the four decades of "real existing socialism" in East Germany has been transformed into a comprehensive multimedia DVD-ROM entitled "Back in the GDR: Contemporary Witnesses Telling Their Stories," and published (in German) by the German Federal Agency for Civic Education.

Despite the sentimental overtones of the project title, "Back in the GDR" is no example of Ostalgie kitsch -- an uncritical, nostalgic longing for an imagined past. The goal of the project, according to historian Stefan Wolle, was to offer a "representative look into everyday life in the GDR."

Wolle, who is a researcher at Berlin's Freie University specializing in the history of East Germany and its ruling Socialist Unity Party (SED), worked on the TV documentary and the DVD-ROM as an expert adviser. 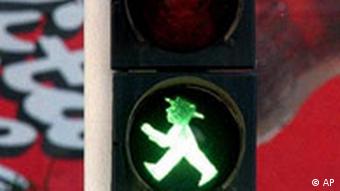 Ever since the fall of the Berlin Wall in 1989 and German reunification the following year, the GDR heritage has been approached in two fundamentally different ways. In the first few years after the dissolution of the GDR, the prevailing popular concern was based on ethical and moral confrontation with the darker sides of the communist regime: the machinations of the notoriously omnipresent Stasi secret police, and the destinies of political prisoners and those killed while trying to escape the brutal dictatorship.

But then a countermovement was set in motion. Those who felt offended by the strictly negative representation of the GDR wanted to show that a happy and easy-going life was also possible under the communist regime. The avalanche of Ostalgie sentiments started with a fight to preserve the East German Ampelmännchen (the traffic-light man) -- the iconic little figure that decorated GDR traffic lights and was especially popular among children.

Initially, after the Iron Curtain fell, the German authorities wanted to replace the figure with the skinnier, less expressive traffic symbol used in the rest of Germany. But residents of the East founded a committee that fought hard to prevent another part of their culture from being swallowed up in the reunification process. And they won.

The apologia for the joys of simple life under communism eventually culminated in the "GDR-Show," -- a television extravaganza in the shape of a romantic love affair with a defeated dictatorship. 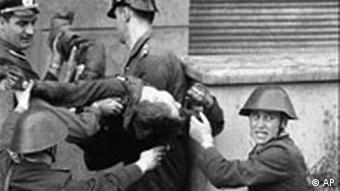 The authors of "Back in the GDR" -- both as a documentary and a DVD-ROM -- tried to distance themselves from both extremes and achieve what Wolle calls the "difficult synthesis from both directions" by showing "life in its constrictions and political oppression, but without painting everything in black and white."

To achieve that, 78 people of different ages, from different walks of life and with very different experiences of the East German dictatorship were chosen to tell their stories and reminiscences about a country and an epoch.

There is, for example, the story of a woman who in the 1950s was not allowed to graduate from high school because she did not want to give up her Christian faith. Or the story of an officer candidate who, shortly before the fall of the Berlin Wall, had to act against demonstrating fellow-citizens even though he himself was no longer certain about his communist convictions. There is also an interview with a former communist official who was involved in election rigging in May 1989.

Between poetry and prose 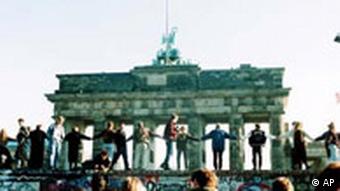 While many Germans greeted the fall of the Berlin Wall, not everybody cheered the dissolution of the GDR

The DVD-ROM contains three sections: "Periods," "Issues," and "Materials." Witness reports can be explored either chronologically, decade by decade, or according to topics such as "Escape and Emigration" or "Youth and Subculture." Many witness reports are accompanied by video excerpts, authentic interviews or original contemporary documentaries.

"Back in the GDR" was conceived by a group of young authors, directors and researchers from both the East and the West. They managed to uncover an impressive array of new sources: amateur films, photos and documents, which, in addition to shedding light on the ways in which historic events effect ordinary people, show a new and very private view of the German Democratic Republic.

Following the reactor meltdown in Chernobyl, information didn't flow -- it trickled. While media coverage in the West was quick to depict the "worst case scenario," the media in East Germany downplayed the "incident." (April 26, 2006)

Rediscovering Fabulous Fashion Behind the Wall

A volume of photographs called "Off the Wall - Fashion from the GDR" is a surprise hit in Britain. With not a Mao jacket or red scarf in sight, it showcases vintage chic straight out of "Barbarella." Realistic it isn't. (May 1, 2006)