Azerbaijan has denied reports of an explosion on its offshore oil and gas fields. Experts believe a mud volcano may have caused the blast. 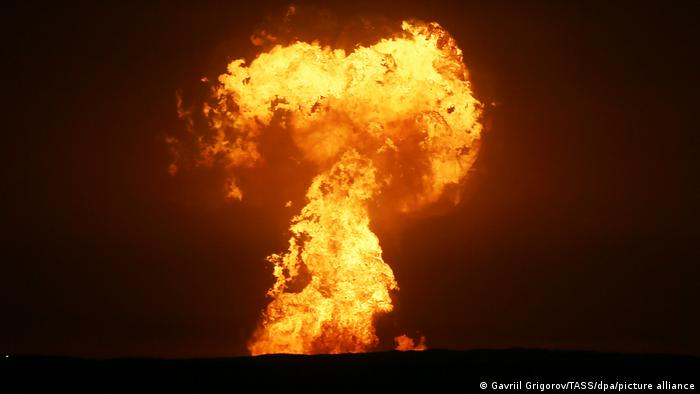 The fire was visible from the coast of Azerbaijan

A large fire has broken out late Sunday in the Caspian Sea, where Azerbaijan has vast offshore oil and gas fields.

Footage circulating on social media showed the huge blaze visible from the coast, and earlier media reports suggested there had been an explosion on an offshore platform.

However, Azerbaijan's Ministry of Emergency Situations denied these reports and said there had been no accident.

The ministry said it was investigating the cause of the fire.

Azerbaijani news agency APA quoted a state oil company SOCAR spokesman as saying a blast took place about 10 kilometers (6 miles) from the Umid gas field, which is 75 kilometers (45 miles) off the coast of the capital, Baku.

According to preliminary information cited by SOCAR, an eruption of a mud volcano caused an explosion. Azerbaijan's Republican Seismological Center offered the same explanation. What is a mud volcano?

"When an eruption occurs on land, a certain amount of fire is thrown into the air, after which the volcano begins to erupt with mud lava," Gurban Yetirmishli, director of the Republican Seismological Center, told Interfax.

"A similar process takes place at sea, just behind the thickness of the water we cannot see the mud that the volcano erupts," Yetirmishli added.

Mud volcanoes spew fire for around 10-20 seconds, according to Yetirmishli.

The Caspian Sea has a high concentration of mud volcanoes, which discharge both mud and flammable gas.