Indonesian mud volcano will continue erupting for decades | Asia | An in-depth look at news from across the continent | DW | 04.03.2011

Ever since it first erupted in 2006, the mud volcano Lusi in East Java has not stopped gushing grey mud and has swallowed at least 12 villages. A new study estimates that it won't stop for decades to come. 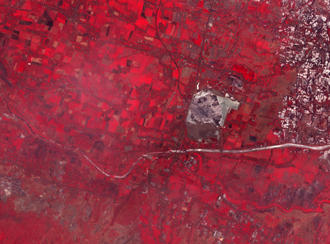 Ever since Lusi roared to life in May 2006, scientists worldwide have been studying the case intensely. It is the world's largest and fastest growing mud volcano.

However, some doubt that Lusi is a natural mud volcano.Richard Davies, professor of earth sciences at Durham University in the UK, is certain that the eruption was caused by drilling activity, 150 meters away from what is now the main vent.

The Indonesian government, on the other hand, says the eruption was triggered by an earthquake that struck days before, about 280 kilometers away from the mud volcano.

Mud will be coming out for decades to come 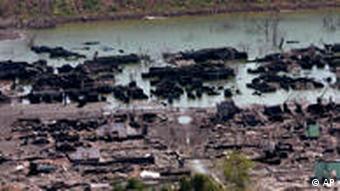 Davies thinks the unnatural cause is the reason why the eruption refuses to stop and looks set to continue for some time.

"We basically look at the pressure under ground in the rock strata that are feeding fluid into the mud volcano, and at the actual mud that has erupted after one and after three years," he explains. "And we have calculated that the mud volcano will carry on for 26 years."

He points out that this is only an estimation of the time needed for the pressure to drop down to normal level. The study that was conducted by an international team was published in the London-based Journal of Geological Society.

Hundreds of small vents popping out

At it’s height, Lusi, a compendium of lumpur (Indonesian for mud) and the area Sidoarjo, spewed enough mud to fill over 40 Olympic-sized swimming pools everyday. Now the lake of mud, which is up to 15 meters deep, has destroyed the surrounding area, swallowing up houses, shops and places of worship. 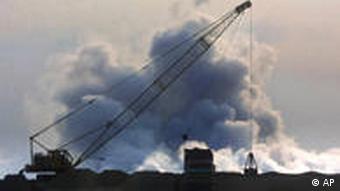 Davies says that the area is habitable "but prone to more and more interference from the mud volcano because of the vents which are popping out without any warning in the inhabited areas, factories and houses."

In addition to the 50-meter wide central vent, there are now almost 170 smaller vents, which have formed outside the volcano. These are dangerous because of poisonous gases.

The attempt to push the mud into the Porong River also carries the risk that it might block the river itself. According to Davies, the biggest risk is that the area subsides slowly over decades to come. That would change the drainage patters so that ditches and rivers actually drain into the area of the mud volcano, which in a few years time could become a large reservoir lake with saline water in it.

Around 13,000 families have been forced to leave their homes. Jeffrey Richards from the Melbourne-based organization Humanitus, which studies the social impact of the disaster, says at least 770 million dollars have been spent on compensation and mitigation since Lusi first erupted.

At least eight people were killed by the eruption and 30,000 have been forced to leave their homes

Richards is confident that by forming an international science group, investigations to the subsurface can be made that would give people a better understanding of the phenomenon. "Only then that we can make a long term social development program," he says.

There are still many inhabitants who have not received compensation for their ruined homes. There are also complaints that the water is polluted and dams have broken because of the unstable ground.

Biofuels became attractive because of their supposed greenness. Worldwide demand has brought jobs and foreign investment to Indonesia. But the rainforests, and thus the environment, are suffering disproportionately. (01.03.2011)

The scientific journal of the World Wildlife Fund (WWF), Conservation Letters, shows that with proper and immediate measures, the present population of over 3,000 tigers in the wild can even be tripled by 2025. (24.02.2011)