Rescue personnel in the German city of Cologne announced they had found the corpse of a second victim of the city's archive cave in last week. An autopsy will be conducted to identify the remains. 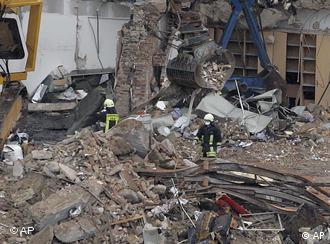 Rescue personnel have been searching the rubble for over a week

While announcing the discovery of a second corpse on Thursday, March 12, a Cologne fire department spokesperson could not confirm whether the body found was that of a 24-year-old who reportedly lived in a building near the archive and has been missing since the archive suddenly collapsed on March 3.

The remains, which were found nine meters (29.5 feet) beneath ground level, had not yet been removed from the rubble and it was impossible to tell Thursday evening if they were from a man or woman, the spokesman added.

Police officials said they would not comment on find until an autopsy confirming the deceased's identity could be conducted.

The collapse's only other known victim, a 17-year-old boy, was found over the weekend.

The collapse appeared to be linked to tunneling work for a new underground train line that undermined the archive, which was crammed with manuscripts detailing Europe's medieval heritage and the works of great authors and musicians.

The disaster is one of Germany's worst heritage losses since World War II.

The archives, which had six levels above ground and two below, were described as the richest municipal record collection in northern continental Europe, including decrees by emperors, lists of medieval residents and centuries of merchants' records.

Rescue workers in Cologne are continuing to search for the body of the remaining victim of the city's archive collapse after the corpse of a teenager was removed from the rubble. (08.03.2009)

More than 200 rescue workers restarted the search for two missing people Wednesday after the collapse of the western German city of Cologne's historical archives center and two neighboring buildings. (04.03.2009)