More than 200 rescue workers restarted the search for two missing people Wednesday after the collapse of the western German city of Cologne's historical archives center and two neighboring buildings. 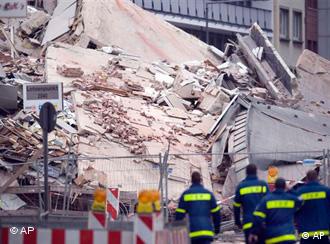 Overnight, police lowered the number of missing people to two, while other reports still spoke of five missing. But there were fears about their survival chances beneath the rubble.

"A quick rescue is not possible," the director of Cologne's fire department, Stefan Neuhoff, said Wednesday, March 4. "The chances of pulling someone alive from the rubble are around zero."

Chief city administrative officer Guido Kahlen confirmed that the odds of finding survivors in the building's ruins were declining by the hour.

"We are delighted that the number of people missing at the moment has not increased ... there are still two people missing," he said. "We cannot guarantee a quick rescue given the difficulty of the situation and therefore the chances of successfully rescuing people are declining." 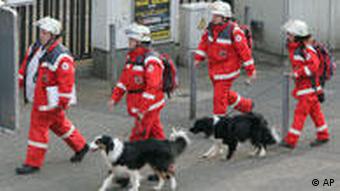 More than 200 rescue workers were deployed to the site

Efforts to save the missing pair -- reported to be two men who lived in an adjacent building -- were being impaired as rescue workers have been unable to stabilize surrounding buildings, despite pouring in 300 cubic meters (11,000 cubic feet) of concrete overnight in a bid to secure the area, news agency AFP reported.

Rescuers worked during the night to prevent the building from subsiding further, while firemen started to retrieve documents from the basement of an adjoining building which was not destroyed in the collapse, a fire department spokesman said.

Sniffer dogs used to search the rubble for those still missing may have detected victims, according to a police spokesman. Rescue efforts, however, could only begin when rubble from the roof has been removed, for which heavy machinery was necessary.

Speculation about the cause of the collapse is focused on new building work for the city's underground transit system, which runs below the archives. Cologne Mayor Fritz Schramma said questions remained over the safety of the work.

"(The question is) whether you can remove such chunks of earth beneath a city as big, as inhabited and as busy as Cologne has been for 2,000 years," he said as he visited the site.

Meanwhile, staff members accused the city authorities of having ignored earlier reports of damage to the building. 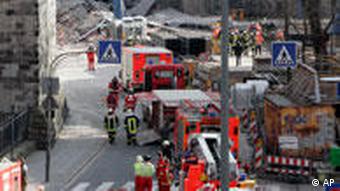 "A technician must be really stupid if such reports are not taken seriously," Eberhard Illner, a former long-time department director in the archives, was quoted as saying by the online edition of the Koelner Stadt-Anzeiger newspaper, accusing the authorities of grave neglect.

City authorities, however, rejected the accusations, saying that earlier expert studies dating from December 2008 said cracks in the building did not affect the building's structural integrity.

"According to today's knowledge, the damage detected back then was not the cause of the accident," said Kahlen, the city administrative officer.

Besides the possible casualties, the damage to the city's historical archives -- documenting Cologne's development over its 2,000-year history -- was immense.

Illner told German radio that the damage was greater than that suffered in a fire at the historic Anna Amalia library in Weimar several years ago.

"We are talking here of about 18 kilometers of shelves of the most valuable archive material," he said.