Austria's new chancellor, Christian Kern, said his Social Democrats would continue to govern with their conservative coalition partners. But he also did not categorically rule out future ties with the far-right FPÖ. 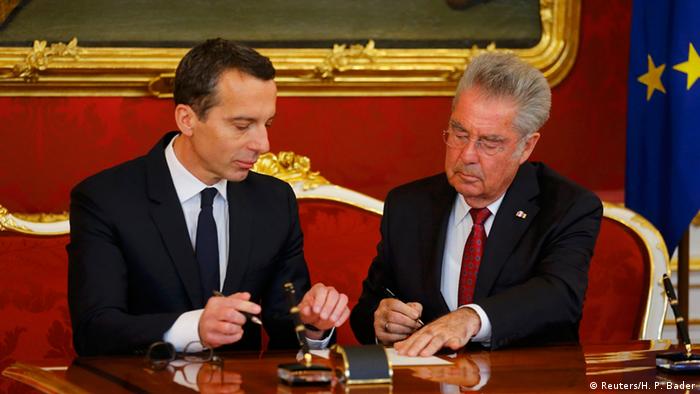 Kern (l.) takes up the post as Austria's traditional grand coalition is shaking

Kern was sworn in on Tuesday by President Heinz Fischer in Vienna.

"You are taking on a great and beautiful but also difficult role with a lot of responsibilities," Fischer said at the Hofburg Palace. 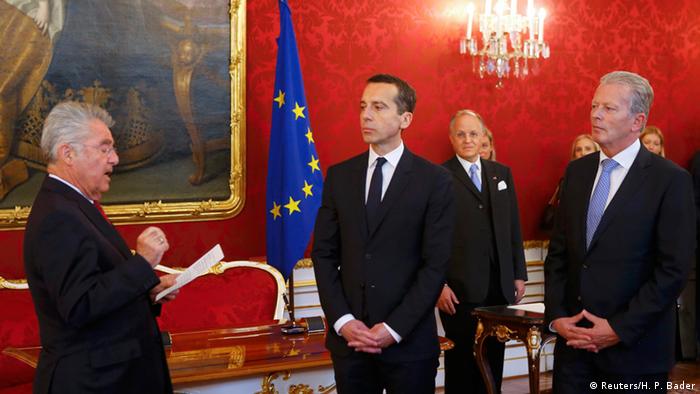 Outgoing President Heinz Fischer (l.) could be replaced by a right-wing head of state

Kern, formerly the head of the country's state railways, said at his inauguration that his Social Democrats (SPÖ) would prefer to continue governing in a "grand coalition" with the conservative People's Party (ÖVP). He said his party would not sell its soul merely to stay in power.

"If we don't comprehend that this is our last chance, the two big parties are going to disappear," said Kern, criticizing the infighting within the grand coalition in particular. "If we continue like this, we only have a few more months until we completely lose the trust of the people."

Austria's two main parties, which have long ruled together, are suffering at the polls at the hands of rival groups.

This was best displayed recently in the first round of presidential elections, the results of which may well have contributed to former Chancellor Werner Faymann's resignation. 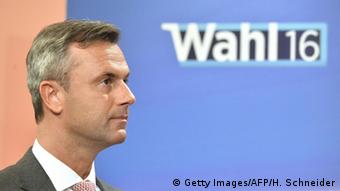 Kern may soon have to work with a right-wing president, if Norbert Hofer wins the second round vote

The presidential candidate for the right-wing, euroskeptic Freedom Party of Austria (FPÖ), Norbert Hofer, will square off against Alexander Van der Bellen, backed by the Green party, in a second round of voting for the largely ceremonial post. Polls suggest the race is too close to call.

"My plan is not to lead the SPÖ into opposition, the opposite is true. But at the end of the day we need an identity and for us it is absolutely unimaginable to work with parties who incite against people and minorities," Kern told his first news conference as chancellor.

However, when asked if he could work with the FPÖ in government one day, Kern said: "Let's cross that river when we come to it," calling his party's explicit ban against any cooperation with the FPÖ "obsolete."

The FPÖ has been a major player in Austrian politics for years, but the recent influx of refugees - and Austria's position on the so-called "Balkan Route" leading refugees inland towards Germany - has given the populist party a renewed boost.

Vice Chancellor Reinhold Mitterlehner, head of the People's Party (ÖVP), said he would support Kern in running the government.

Kern is also taking up the party leadership of the SPÖ, which on Tuesday appointed replacement ministers for education, infrastructure and for the chancellery.

Kern said that his plan for the nation's refugee policy included efforts to alleviate concerns of the public while treating migrants with respect.

In the past year, Austria has reinstated border controls with Slovenia and Hungary after thousands of refugees came into Europe from the Middle East and North Africa. "I think you all know what challenges we had to face. We stood our ground. We must also do our best to treat refugees with respect," Kern told reporters.

The head of Austria's railways looks set to succeed Werner Faymann, who stepped down earlier this week. Another potential candidate has ruled himself out of contention. From Vienna, Alison Langley reports. (12.05.2016)

Austria's senior coalition party has officially nominated railway boss Christian Kern as the country's next chancellor. The decision follows the abrupt resignation of Werner Faymann after months of in-party ructions. (13.05.2016)

Austrian Chancellor Werner Faymann, who has resigned, only stayed in office so long because he had no clear successor, says political scientist Reinhard C. Heinisch. His resignation doesn’t solve Austria’s problems. (09.05.2016)