Austrian man tries to board train — with a horse

A man walks onto a train with a horse… What sounds like the start of a joke had Austrian commuters chuckling. Even the rail authority thought it was a laughing matter — at first. 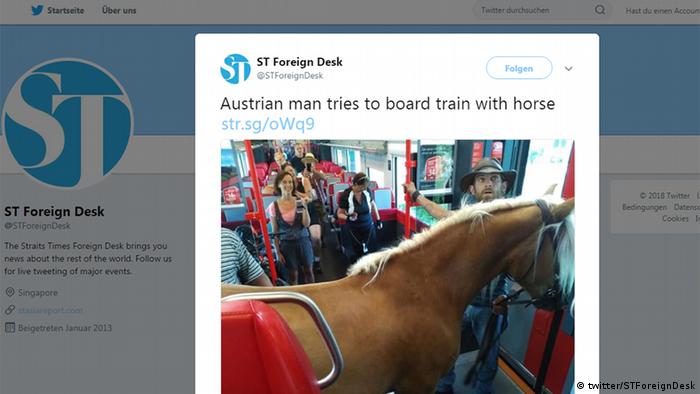 Photos posted on social media showed a man and his horse as they boarded a train in the mountainous, forested Austrian state of Styria.

He reportedly tried to board two trains with his equine companion on Wednesday, but the train conductors refused to continue the journey with Frieda on board.

Austria's national railway system playfully joked about the situation at first, then more seriously warned others not to follow suit, pointing out that horses were not permitted on its trains. Some smaller animals, however, are allowed.

"The tame (but uninvited) guest had to leave the train — it was still an amusing afternoon," Austrian Federal Railways (ÖBB) tweeted.

"We hope this will stay a one-off," ÖBB spokeswoman Julianne Pamme was quoted as saying by Austrian news agency APA, adding that horses could be dangerous in certain situations, such as if the train had to brake suddenly.

Read more: Should animals be given more rights? The documentary 'Citizen Animal' tries to answer

The Austrian Federal Railways guidelines state that small, harmless animals in closed and secure containers, as well as dogs on leashes and wearing muzzles can be taken on trains.

Searching for the lost horses

A lost painting by Franz Marc has inspired present-day artists to create new works. “The Tower of the Blue Horses” continues to weave its spell in video art and installations inspired by associations it evokes. (08.04.2017)

Species on the move

Not all animals and plants are endemic to the environments in which they roam and grow. On the contrary, the world is full of "alien species." Some wreak havoc in their new homes, while others are a bonus. (22.12.2015)

All the wild horses are extinct: study

New genetic research has revealed that the world's wild horses went extinct hundreds, if not thousands, of years ago. Scientists found that an assumed wild breed, native to Mongolia, were actually domesticated horses. (23.02.2018)