Austrian Interior Ministry under fire for plans to curb media

Austrian police should minimize the amount of information they share with "critical" media outlets, according to a leaked email. The ministry, controlled by the far-right FPÖ, wants more focus on suspects' nationalities. 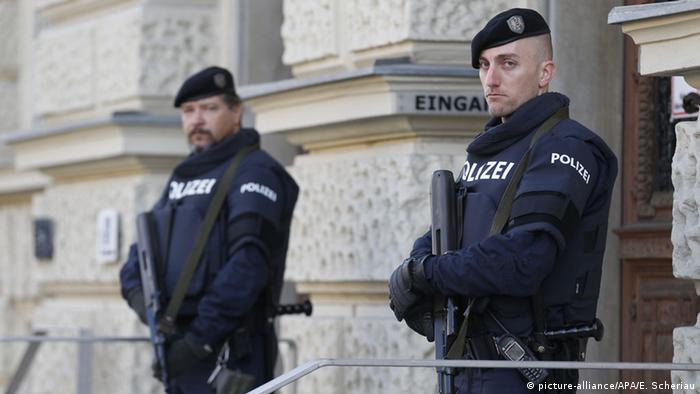 Police officers and Interior Ministry employees in Austria should keep "critical media" at arm's length, according to a leaked internal memo.

The email to staff accused the established dailies Der Standard and Kurier and the weekly newsmagazine Falter of "very one-sided and negative reporting about the ministry and the police."

"Facts and explanations are not relevant anymore, they are just ignored because the articles are negative anyway, as demonstrated by many articles in recent past," Interior Ministry spokesman Christoph Pölzl wrote in the email. The author urged staff to run their responses past him if they concern more than one department.

"In other cases, may I suggest limiting communication with these media outlets to the (legal) minimum and not providing them with additional perks, such as exclusive access," he writes. An exception can be made "if you see real additional value, for example, a possibility of neutral or even positive reporting."

When contacted by DW on Tuesday, Pölzl confirmed the email was authentic. However, he described the message as "suggestions and comments" which "had no mandatory or even instructional character."

"Obviously, it is the right and even duty of all media to cast a critical light on the work of the police, the Interior Ministry, and the minister," he told DW in an emailed statement. "However, it is also the right of the people in charge of communication to form a picture based on the information they have provided and the reporting resulting from it, and to draw conclusions on the quality."

The controversial email aims to stimulate "a more uniform presentation of the police and the Interior Ministry in certain areas of cooperation with the media," he added.

The email also recommends police "proactively" send out more information on sex crimes, "especially with crimes committed in public with considerable degree of violence or coercion or when there is no connection between the perpetrator and the victim."

Also, the ministry advises the employees to explicitly state the suspects' citizenship in all cases when dealing with the media. If the suspect is a foreigner, the police should state "their status of residence and whether they are an asylum-seeker," according to the email.

Read more: Austria to ban asylum-seekers from taking up apprenticeships

"This comes from the background of maximum transparency and the existing, justified interest from the population and the media," Pölzl wrote.

According to Der Standard, the recommendation clashes with a guideline by the Justice Ministry, which says that a suspect's ethnicity or religion "should only be indicated when it is absolutely necessary for understanding the event in question."

The leaked message prompted harsh criticism, with media outlets accusing Interior Minister Herbert Kickl from the far-right FPÖ party of trying to muzzle the critics and fan prejudice against foreigners. The FPÖ is the junior partner to Chancellor Sebastian Kurz's ÖVP conservatives in Austria's ruling coalition.

In a statement to DW, Pölzl slammed the attacks on the minister, saying that the politician "neither commissioned nor received this message, and neither did the members of the Ministry's cabinet."

Pölzl added that his ministry was preparing a "new guideline for transparent communication with the media," which would soon be presented to the public.

Commenting on the event on Tuesday, Chancellor Kurz seemed to side with the critics.

"Parties and government institutions carry a high degree of responsibility for free and independent journalism in the country," he said from the sidelines of a UN event in New York, according to the DPA news agency.

"Any limitation of press freedom is not acceptable," he added.

Austrian anti-terror chief Peter Gridling has been suspended by the nation's new conservative-far-right government. Opposition parties want a probe into a police swoop on the Vienna agency of the former Europol expert. (13.03.2018)