Austria's ex-Chancellor Sebastian Kurz announced he is stepping back from politics. His successor, Alexander Schallenberg, has also announced his resignation. 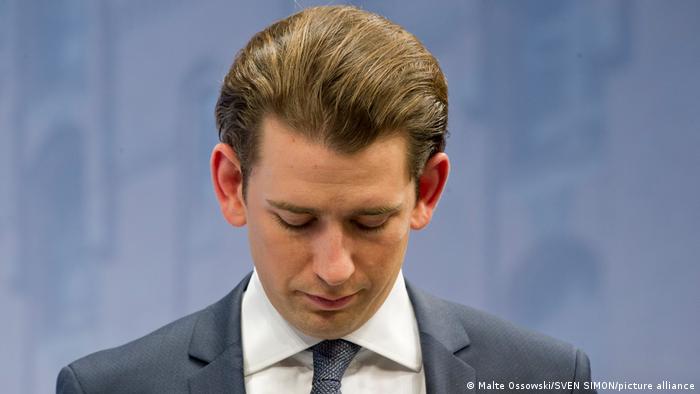 Former Austrian Chancellor Sebastian Kurz, 35, announced Thursday he would step back from politics.

Kurz resigned his posts as the head of his conservative People's Party (ÖVP) and as parliamentary group leader.

He recently became a father. In his statement, he said he was withdrawing from politics to focus on his family. He also pushed back against criticism and allegations of corruption.

"As chancellor, you have so many decisions that you have to make every day, that you know early on that you will also make wrong decisions," he said.

"You're always under observation. You also constantly have the feeling that you're being hunted," Kurz added.

Austrian newspaper Kronen Zeitung was first to report Kurz planned to retire from politics. Kurz's withdrawal from national political life comes as a surprise to Austria.

In October, Kurz stepped down as chancellor under pressure from coalition partner the Greens after prosecutors placed him under investigation on suspicion of corruption. Prior to then, most Austrians thought Kurz would remain in office for years.

Later on Thursday, Chancellor Alexander Schallenberg, a Kurz loyalist who took over when Kurz resigned from the chancellorship, announced he would not run for party leadership and announced his intention to resign as head of government.

"I firmly believe that both positions — head of government and leader of the Austrian party with the most votes — should soon once again be held by the same person," Schallenberg said in a statement.

"I am therefore making my post as chancellor available as soon as the relevant course has been set within the party," he added.

Kurz is being investigated for giving false statements and breach of public trust. It is alleged that public funds were misused to buy complimentary journalistic coverage among other things.

In his resignation statement, Kurz hit back at the accusations against him, saying they hampered his ability to work.

His last months in office were more about "defending against accusations and proceedings and no longer about a competition for the best ideas."

What is behind Sebastian Kurz's resignation?

Kurz said the process had been "very exhausting" for him.

Many in his own ranks believed his successor as chancellor, career diplomat Alexander Schallenberg, was merely a placeholder until Kurz could return after clearing his name.

Kurz's People's Party is one of the primary traditional political parties in Austria. After he became leader in 2017, the party built itself around him, leaving no obvious choice for successor.

Interior Minister Karl Nehammer will succeed him as party chair.