The stamp was inspired by the panic-buying of toilet paper when COVID-19 first hit Europe in the spring. It shows a baby elephant, a symbol which has encouraged citizens to keep their distance during the pandemic. 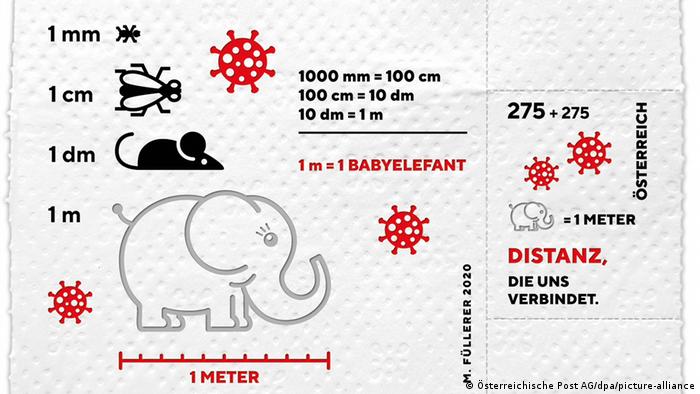 The coronavirus pandemic has inspired Austria to make stamps out of toilet paper, the country's postal service announced on Friday.

The national delivery service said it got the idea for the three-layered stamp when hygienic products, in particular toilet paper, became a symbol for panic-buying. The splurges were sparked by lockdowns implemented to curb infections as the pandemic took hold across Europe earlier this year.

However, it took several months to turn the vision into reality due to a lack of material.

"Domestic toilet paper was sold out for a long time and difficult to get in the required quantities," the state-controlled mail service said in a statement, reported by news agency dpa.

The stamp shows an image of a baby elephant, which has been used in Austria to symbolize the 1-meter (3.2 feet) physical distancing advice used in the European country to avoid the spread of the novel virus.

The novelty doesn't end there, though. The stamp has the unusual value of €2.75 plus a surcharge of €2.75 ($3.25), as the mail service donates half of the price to help those who have been severely affected by the pandemic.

It's not the first time the Austrian postal service has come up with an innovative response to current affairs. In January this year the operation released a special Brexit stamp to mark the United Kingdom's departure from the European Union, albeit somewhat delayed.

The stamps were originally made with the UK's initially proposed exit date of March 29, 2019. However, after a number of delays on Britain's departure from the bloc, the possibility of the stamps coming on the market was placed in jeopardy.

Once Brexit was eventually confirmed at the beginning of the year, Austria Post did not wish to design new stamps. Instead, it went with the old date crossed out, and the new date of January 31, 2020 written underneath.

Authorities in Vienna want more residents to get the seasonal flu vaccine and reduce the load on hospitals struggling with coronavirus infections. People in the city can hop aboard for a free jab.

One of Europe's first coronavirus outbreaks was witnessed at a ski resort in the region of Tyrol. An independent investigation has blamed a slow reaction and poor communication from officials for worsening the crisis.