Austria's long-running grand coalition uniting the conservative People's Party and the Social Democrats will stand for another five-year term. The government pledged a continuation of its "successful course." 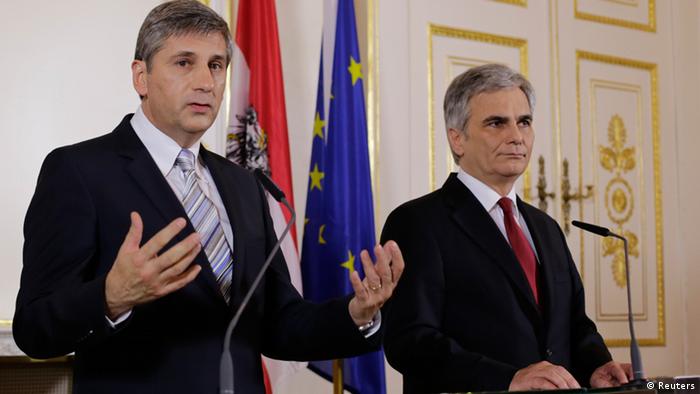 Austria's main center-left and center-right parties on Thursday agreed to another term ruling as a grand coalition after securing only a narrow combined majority in elections on September 29.

"We know that the result that we have achieved together will mean that … Austria will stay on its successful course," Chancellor Werner Faymann of the center-left Social Democrats (SPÖ) said in Vienna. "We don't have to reinvent the successful country that is Austria. We are an example in Europe for economic power and social stability."

Austria fares well in most European economic indicators and boasts the lowest unemployment rate in the EU. Yet government forecasts have begun pointing towards an economic slowdown and a 24-billion-euro ($33-billion) shortfall in the 2014-18 budget, an issue of great importance to the conservative People's Party (ÖVP) during coalition and budget negotiations.

"We have a big joint project: to lead Austria out of the crisis by 2018," Vice Chancellor and ÖVP leader Michael Spindlegger said on Thursday, pledging that a "pact for growth" and some privatizations would play a part in the project. The postal service and telecommunications giant Telekom Austria are among the businesses that could be privatized.

Faymann's SPÖ won 27 percent of the vote in September, just ahead of the ÖVP on 24 percent. The anti-immigration and euroskeptic FPÖ, led by Heinz-Christian Strache, came in third with 20.5 percent - making gains at the larger parties' expense.