The debate on traffic safety broke out after two children died when a car hit the bike trailer they were riding in. The far-right is mulling a ban, while others say more limits are needed for cars — not for bicycles. 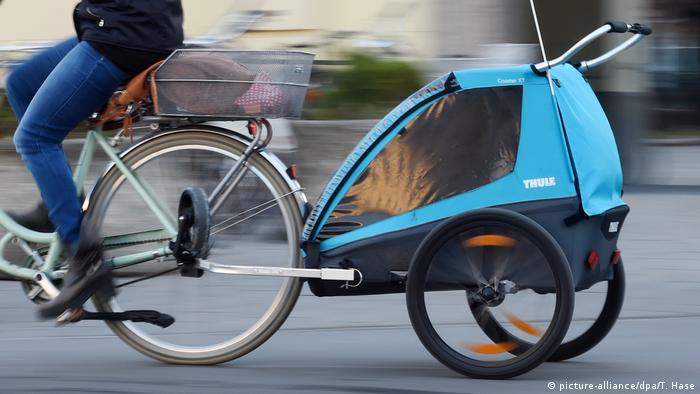 Following the tragic deaths of two young children in a traffic accident, Austrian politicians are locked in a debate with bicycle advocates over safety measures for children on bikes.

A 1-year-old and a 4-year-old died on Monday in a town outside of Vienna after a car hit the bike trailer that they were traveling in. The 39-year-old mother who was pulling the children behind her electric bike was also injured.

Police said that the trailer was sent flying 15 meters (49 feet) into a nearby field and that the cause of the accident was still unclear.

Both the mother and the 60-year-old driver of the car are being investigated on suspicion of involuntary manslaughter, reported Austrian newspaper Der Standard.

Austrian authorities said they are still working to determine whether the trailer was properly lit and that neither child was wearing a helmet.

Bike trailers 'have no business on the streets'

Politicians with the far-right Freedom Party of Austria (FPÖ) called for investigations into accidents involving the child transporters, and have voiced support for a ban.

"Bike trailers for children have no business on the streets," FPÖ politician Karl Baron said in a statement.

"The FPÖ has been warning for years about the insufficient safety of bike trailers or cargo bikes to transport children on the road," added Baron, who is the party spokesperson for Vienna's transportation committee.

Transportation Minister Andreas Reichhardt, also a member of the FPÖ, announced on Tuesday that the government is investigating data on child transport on bikes.

The FPÖ's proposals and articles criticizing the safety of bike trailers received pushback from safety experts and others on social media who urged expanded protections for bicyclists.

"The fact is that the danger stems from those 1.5-ton vehicles traveling at 100 kph (62 mph) and not from child trailers," wrote Ulrich Leth, a transportation expert at the Technical University of Vienna, on Twitter.

"The discussion must then revolve around minimizing the risk from cars," he added, suggesting speed limits as a possible solution.

Ines Ingerle, a communications official with Austria's bicycle lobby, also took issue with the criticism leveled at electric bikes due to the accident.

"Whenever a car driver is unsafe and hits a bike trailer, it doesn't matter whether it was being pulled along by an electric bike or one powered purely with muscle power," Ingerle told Der Standard.

She urged for more security measures for bikes to move around safely, such as installing more bicycle lanes.

Unlike in Germany, children under the age of 12 in Austria are required to wear helmets including while riding in a bike trailer.

The trailers are also required to have sufficient lighting on the backs and sides that is separate from the bike, as well as seat belts and brakes.

Tens of thousands of cyclists have taken over the streets of Berlin as part of a campaign to make the city more bike-friendly. Organizers have called it the "biggest bicycle demonstration in the world." (02.06.2019)

About 60 bicyclists bared nearly all to cycle around the western city of Cologne promoting safety on the streets. German laws restrained the Naked Bike Ride motto 'bare as you dare' to a degree of modesty. (12.07.2019)