An Australian teenager has made history by becoming the youngest person to fly solo around the world in a single-engine aircraft. It took the Queenslander seven weeks in his Cirrus SR22 propeller plane. 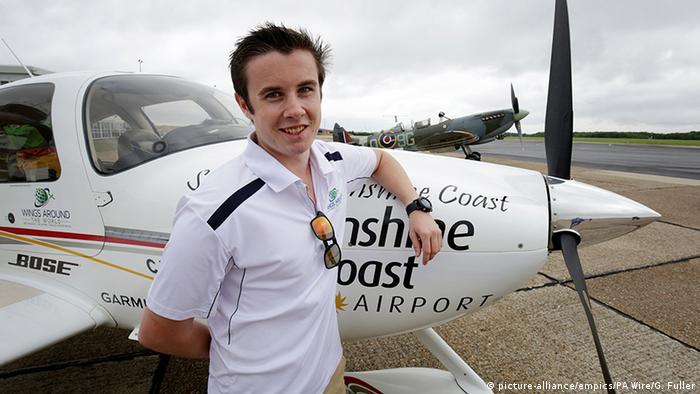 Queensland pilot Lachlan Smart became the youngest person to circumnavigate the globe solo in a single-engine plane Saturday after touching down at Sunshine Coast Airport in Marcoola just north of Brisbane.

"I'm on an absolute high at the moment," Smart told the Australian Broadcasting Corporation after landing his plane. "To actually be here, having flown around the world, for over 24,000 nautical miles is just a great relief."

Smart's voyage began on July 24. Since then he has logged hundreds of flying hours in his Cirrus CR22 propeller plane and stopped at 24 locations in 15 countries.

At 18 years, seven months and 21 days, Smart is a year younger than the previous record holder: American Matt Guthmiller.

A few hiccups along the way

"In the Pacific I had some pretty horrendous weather," he said. "To try and make my way around and over Saudi Arabia, I had five-and-a-half hours of pretty bad turbulence as well as air traffic control problems in India and Malaysia, so there were lots of areas where I had issues but nothing I couldn't overcome."

He had some words of advice for anyone considering taking on a big challenge: "Don't be afraid to dream big and when you have a goal - go for it," Smart said.

As he arrived back in Australia, Smart said he planned to go home, lie in his bed, and catch up with friends and family.

Aviator Tracey Curtis-Taylor has arrived in Australia after a three-month trip in a biplane more than 70 years old. The flight was in part an homage to legendary female adventurer Amy Johnson. (09.01.2016)