Christian Porter identified himself as the subject of allegations that became public this week. He said he wouldn't resign over the claims, which he said were false. Police have halted their investigation. 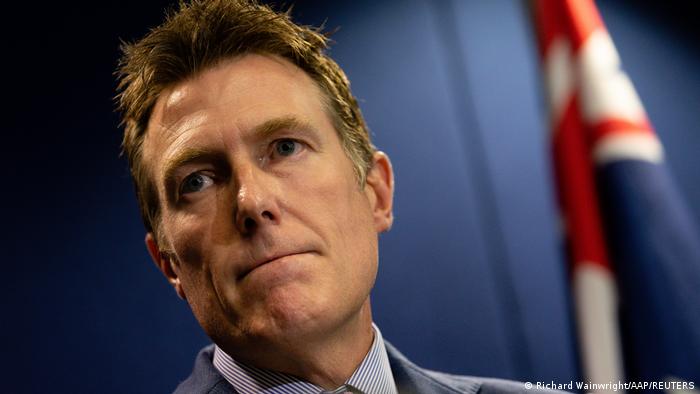 Australian Attorney-General Christian Porter denied having sexual contact in 1988 with a 16-year-old who had accused him of raping her, and said Wednesday he would not resign over the allegations.

Porter said he would instead take a period of leave to care for his mental health after the allegations surfaced.

"I'm going to take a couple of short weeks leave just for my own sanity,'' Porter said. "I think that I will be able to return from that and do my job.''

Politicians who last week received an anonymous allegation of an assault in 1988 had referred material to federal police. On Tuesday, police in New South Wales state, where the alleged assault occurred, said there was insufficient evidence to investigate the claim and closed the matter.

Police said the allegation could not be investigated further, as the alleged victim did not make a formal statement to them before committing suicide last year.

Australian media had not identified Porter in line with privacy standards, though it was apparent that the case concerned one of the 16 men in Australian Prime Minister Scott Morrison's 22-member Cabinet and Porter had been widely identified online. Opposition politicians were also threatening to name him in parliament, where they could do so without fear of prosecution, unless the identity was revealed.

Seeking to end speculation over the case since it was first reported last week, Porter identified himself as the subject of the claim, saying that the incident had never happened.

He said that everything he knew about the allegation was what he had read in the media, and that the details of the claim had never been presented to him.

"I can only say to you that it didn't happen," Porter told reporters in Perth, adding that he was being asked to "disprove something that didn't happen 33 years ago."

AG says he will not resign

He said that the allegation would not warrant him standing down from his job. "If I stand down from my position as attorney-general because of an allegation about something that simply did not happen, then any person in Australia can lose their career, their job, their life's work based on nothing more than an accusation that appears in print,'' Porter said.

"If that happens, anyone in public life is able to be removed simply by the printing of an allegation,'' he added.

Prominent lawyers and friends of the woman have called for an independent inquiry into the allegations. Porter said he was 17 when he competed alongside the 16-year-old accuser on his high school's debate team in 1988, and had not heard from her since. The woman has not been named.

Australia's Minister for Industrial Relations Michaelia Cash is set to stand in as acting attorney-general while Porter takes leave.

The scandal comes as the government has been under pressure over its handling of unrelated allegations made by three former staff members, that they had been raped by an unidentified colleague.