The airline wants to operate the world's longest commercial flights from Australian cities to London and New York, shaving off nearly four hours of travel time. The first flights are expected to take off by late 2025. 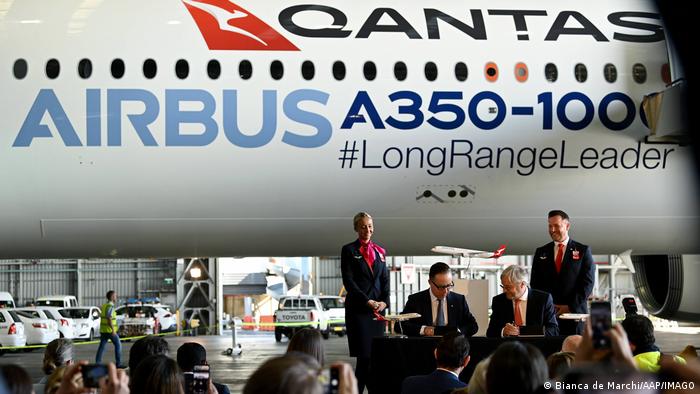 Australia's flagship carrier Qantas has ordered 12 A350-1000 planes from Airbus SE, which will allow the airline to run nonstop flights from Sydney and Melbourne to cities like New York and London from late 2025.

The new jets will be used on what will be the world's longest commercial flight under "Project Sunrise."

"The board's decision to approve what is the largest aircraft order in Australian aviation is a clear vote of confidence in the future of the Qantas Group," Chief Executive Alan Joyce said in a statement. The order also includes 40 "narrowbody" jets to renew the airline’s domestic fleet.

While the value of the deal was not disclosed, it is expected to be in the billions of dollars based on aircraft list prices.

Qantas has operated research flights for longer sectors since 2019, which includes a trial London-Sydney flight of 17,750 kilometers (11,030 miles) that took 19 hours and 19 minutes. The airline already operates a 14,498-kilometer Perth-London trip, which takes about 17 hours.

"New types of aircraft make new things possible," said Joyce. "The A350 and Project Sunrise will make any city just one flight away from Australia."

"It's the final frontier and the final fix for the tyranny of distance," he added.

The deal brings Qantas closer to launching the record-breaking direct flights — nearly 20 hours long — on the "Kangaroo route" between Sydney and London. The planned trips will "cut up to four hours off total travel time compared with one-stop options today," the company said.

Qantas is also expecting deliveries of 20 A321XLRs starting late 2024, while 20 smaller A220s will arrive late 2023, giving the carrier's aging domestic fleet a face-lift. The deal also includes options to buy an additional 94 aircraft, which would arrive through to 2034.

"The phasing of this order means it can be funded within our debt range and through earnings, while still leaving room for shareholder returns in line with our financial framework," Joyce said.

The new domestic fleet "will reduce emissions by at least 15% if running on fossil fuels, and significantly better when run on sustainable aviation fuel," he added.

Qantas had announced plans to launch commercial flights connecting Sydney, Melbourne and Brisbane with New York and London by 2022, but the project was hit by restrictions imposed due to the coronavirus pandemic. With an increase in demand domestically and internationally, the company is looking to capitalize on improving market conditions.