Prime Minister Scott Morrison has called for an increase in the number of women joining politics, as his government faces yet another allegation of sexual misconduct. 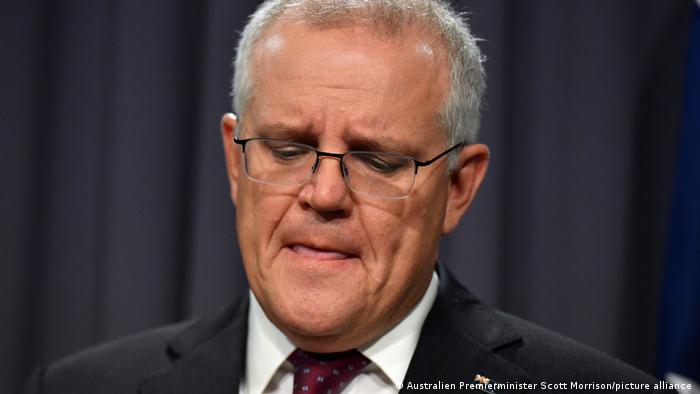 Australian Prime Minister Scott Morrison on Tuesday said he was shocked and disgusted by the latest sex scandal that has hit his government, adding that he wanted more women to join politics.

"It's just absolutely shameful," Morrison said in reference to a group chat at the center of the scandal. "I was completely stunned, as I have been on more than one occasion over the course of this last month."

One government staff member has been removed from his position and the government has promised further action in response to the allegations.

What is the latest scandal about?

Several male government staffers had set up a group chat where they would share images and videos of sex acts performed in Parliament House, including on the desks of female lawmakers.

The photos and videos were leaked by a whistleblower and were first revealed by The Australian newspaper and Channel 10 late Monday.

This prompted outrage among female lawmakers and the Australian public.

The whistleblower, identified only as Tom, told the news outlets that government staffers and lawmakers often used a Parliament House prayer room to have sex.

He also alleged that sex workers had been brought into the building "for the pleasure of coalition MPs."

The group of staffers on the chat routinely exchanged explicit photos of themselves, adding that he received so many that he had "become immune to it."

There was a "culture of men thinking that they can do whatever they want," the whistleblower said.

What were the previous scandals about?

Last month, Brittany Higgins, a former government staffer, alleged publicly that she had been raped by a colleague in a minister's parliamentary office in 2019. She said she did not go to the police for fear of losing her job.

Earlier this month, Attorney-General Christian Porter refused to resign over an allegation that he raped a 16-year-old girl in 1988 when they were both students.

Morrison stood by Porter and rejected calls to suspend him, saying that Porter had "vigorously denied" the allegations. The complainant has since died and police have ruled out charges.

Tens of thousands of women this month joined rallies under the slogan #March4Justice to protest sexual violence and gender inequality, calling for systemic change in politics and wider Australian society.

The prime minister said "a very traumatic month" had passed since Higgins went public with her allegations and acknowledged the mounting dissatisfaction with his government's response.

"I acknowledge that many Australians, especially women, believe that I have not heard them, and that greatly distresses me," Morrison said at a press conference in Canberra. "We must do better... we must get this house in order."

The staffer's rape allegation prompted Morrison to order a review of Parliament House workplace culture, which has been repeatedly criticized as "toxic," and one that contributed to bullying, harassment and sexual assault of women.

The investigation will be headed by Sex Discrimination Commissioner Kate Jenkins and will conclude in November.

Morrison said he expected compulsory harassment and misconduct training would be introduced in Parliament House as well a "more robust and independent" complaints mechanism for staff who are sexually harassed.

He also that he was open to his conservative Liberal Party introducing a minimum quota of female candidates to run in elections, something that conservative coalition parties have previously opposed.

The investigation, sparked by a tip from US authorities, led to 17 arrests and more than 800 charges being laid. Police have identified 46 victims, many of whom were from a childcare center.