Atomic waste train back on move after anti-nuclear blockade | Germany | News and in-depth reporting from Berlin and beyond | DW | 05.11.2010

A train carrying reprocessed nuclear waste from France to Germany is back on the move after being blocked by protesters. The almost yearly shipment to Gorleben has become a focus for German anti-nuclear activism. 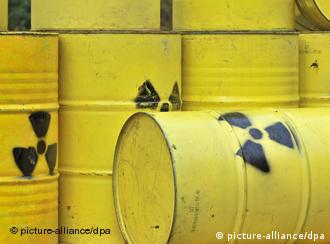 The nuclear waste still has no final destination

A shipment of reprocessed atomic waste is back on the move after anti-nuclear activists blocked its journey from a French reprocessing plant to a storage site in northern Germany.

Protesters brought the train to a halt close to the main railway station in Caen, Normandy, soon after it left the town of Valognes on Friday afternoon.

A police spokesman told the DPA news agency that protesters had chained themselves to the railway track, with about 30 activists taking part at the scene.

The agency later reported that five protesters who had been uncoupled from the track were taken into custody. The train was delayed for about three hours.

Some 150 protesters nearby had unfurled a banner in German, declaring "our resistance knows no borders."

Up to 30,000 protesters were expected to gather at the end of the route being taken by the reduced-speed nuclear waste transport to the site in Gorleben in Lower Saxony. 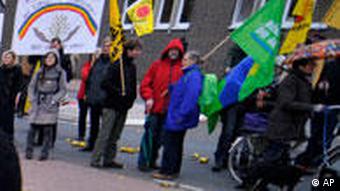 Protesters have been preparing for weeks

Some of those activists were expected to try to occupy railway tracks and obstruct roads in the town of Dannenberg, where the waste was due to arrive over the weekend to be transported by truck to Gorleben, 20 kilometers (12 miles) away.

The shipment consists of 123 metric tons of treated waste in 11 carriages - originally from German power stations - and was being accompanied by three carriages of riot police.

German Green Party co-leader Claudia Roth said that members of her party would be taking part in the protests, but warned against violent action. "Any form of violence weakens the peaceful and legitimate protest and discredits it," she told the German daily newspaper Frankfurter Rundschau's Friday edition.

Roth added that the Greens did not support an internet-based campaign for protesters to stop the transport by removing stones from beneath rails.

More than 16,000 police officers were being deployed to ensure that the transport reaches its destination safely. Shipments take place almost every year and, in the past, protesters have also attempted to delay the shipment by a number of means - including blocking the route with tractors, holding sit-down demonstrations and throwing fireworks.

Police say this year's protests are likely to receive increased impetus because of recent large-scale demonstrations in Stuttgart against the reconstruction of the city's main railway station. 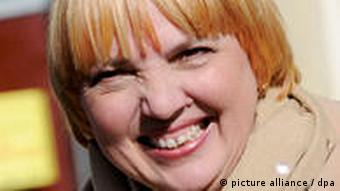 The deputy president of the German Police Union, Bernhard Witthaut, told the newspaper Stuttgarter Nachrichten that police would not try to "beat a way through" for the transport, but that they did have the duty of ensuring its security.

Witthaut also warned against violence, saying the police had a duty to protect themselves.

Police have already dispersed protesters blocking a road near the southern German town of Metzingen, traditionally the site where the first protests kick off. They have also removed a rock placed on the railway route by suspected anti-nuclear activists near the town of Dahlingen.

The police union's chairman, Rainer Wendt, meanwhile called on the German nuclear industry to help pay the expenses of providing security for the transport. He told the newspaper Neue Osnabruecker Zeitung that it was not acceptable for taxpayers to foot the full bill in view of the billions of euros in profit made by the industry. He estimated the cost of the transport to taxpayers at over 50 million euros ($71 million). 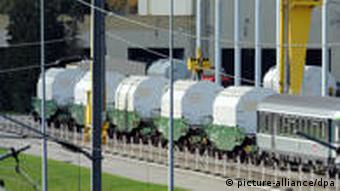 Many critics consider Gorleben unsuitable as a storage site

The interior minister of the northern state of Lower Saxony, Uwe Schuenemann, called on Chancellor Angela Merkel to recompense his state to the tune of 25 million euros for the costs incurred for the transport.

The temporary storage site in the Lower Saxony town of Gorleben is itself controversial, with critics saying there is a danger of ground water contamination. Protesters are also angry at the recent decision by Chancellor Angela Merkel's center-right coalition government to extend the lifetime of the country's nuclear plants by an average of 12 years, overturning a decision by an earlier government to phase out atomic plants by 2021. They say this means more nuclear waste is going to be produced without there being a safe repository for it.

With surveys showing a majority of Germans opposed to the use of nuclear power, the red “X” used at the Gorleben protests could become a ever more frequently seen symbol in Germany over the coming years.

Thousands of protestors across Germany made it known Saturday that they didn't want radioactive atomic waste transported through their towns. The waste is set to flow into Germany from France starting next month. (23.10.2010)