At home in Trump's America

Alice Butler-Short is fed up with politicians who can't get their acts together. She wants a leader who can move the US forward - and she believes Donald Trump is that leader. Ines Pohl reports from Lorton, Virginia. 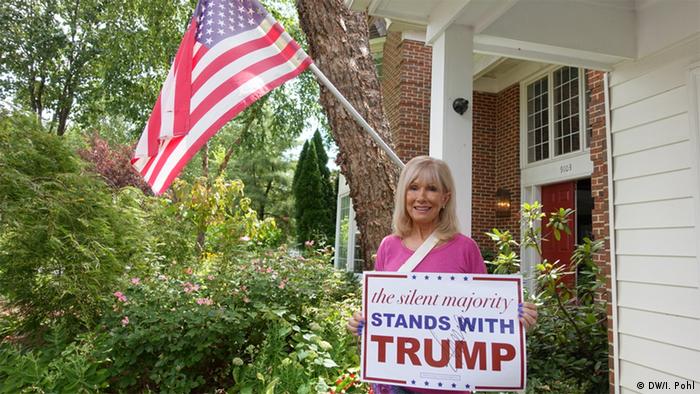 The women's group that Alice Butler-Short set up almost a year ago in Lorton, Virginia, has nothing to do with feminism. "Many women who call themselves feminists are, to me, not feminine enough," Butler-Short said. "I love men who carry my boxes and know how to change a lightbulb."

Petite, well-toned and spruce from head to toe, Butler-Short presides over Virginia Women for Donald Trump, which aims to prevent the downfall of the United States by moving the Republican presidential candidate into the White House rather than his Democratic opponent, former Secretary of State Hillary Clinton. Virginia is a "purple state" - one where residents are relatively divided in their loyalties between Republicans and Democrats, and one with enough Electoral College votes to make it worth candidates' whiles. "Women are better suited when it comes to convincing other people," Butler-Short said. "We are more communicative, and we are also more persistent when it really matters."

Butler-Short's life story reads like a deluxe version of the American dream. She was born Alice Butler 73 years ago in Ireland. Her father was a shoemaker, her mother a housewife. As a girl, she dreamed of conquering the world as a dancer. 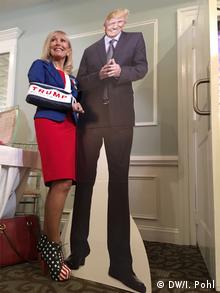 Butler-Short is a dedicated campaigner for Trump

Alice Butler moved to London when she was 18 and met her first husband there. He was Chinese, and they moved together to Hong Kong, where they lived for 13 years. The couple had three sons. The family had to leave the country for political reasons and moved to Canada. Following the death of her husband, Alice met her current spouse, a colonel at the time. They moved to the United States in 1983, and she accompanied him to Somalia in 1986 and then on to Singapore before returning to the US in 1993. Butler-Short now has seven grandchildren and US citizenship, which means the right to vote - and she has taken to the campaign trail.

"Especially when I was in Africa, I learned to appreciate what a great country the United States is," Butler-Short said. She added that she is attracted to the emphasis placed on individual rights - "but those liberties are under threat."

Butler-Short has decorated her home with mementos of the lands she has lived in. Part of the basement of her magnificently assembled house is even called the "African Room." Large Chinese vases and beautiful porcelain plates catch the eye in her two impressive living rooms. A large TV screen is positioned in a lavishly decorated cupboard from Northern China. In the hall, there's a console table from Singapore; the walls are decorated with large wooden figures from Thailand. There's a beautiful Japanese garden, with waterfalls, goldfish pond, and tiny temples, bridges and terraces. Perhaps, she said, Americans have not noticed the dangers to their country that she has is because they are not as well-traveled as she is: "Sometimes you have to take a bird's-eye view to become aware of the beauty - and the threat."

Butler-Short talks about war, a fight, the US's potential downfall. She believes in the US military's force as a deterrent. ("Our defenses must be so strong that we'll never have to use them.") She advocates weapons. ("Nazi Germany taught us what we get if people are unable to defend themselves against someone like Hitler.") She favors locking down the frontiers. ("Defending our country starts at our borders: We can't let any more terrorists into our country.")

And Butler-Short wants the United States and its people to come first. "I've been living in countries that need our help," she said. "And I'm in favor of helping them militarily and economically." Butler-Short is both hard and soft. Her friends praise her generosity: She loves to give presents - lots of them. But she wants to determine for herself who gets a gift, and when.

"The better off we are ourselves," Butler-Short said, "the more we're able to help other people."

The home's walls are covered in family photos: weddings, baptisms, holidays. One wall is dedicated to Butler-Short's political family. "To Alice - Best wishes, George Bush" reads the signature under the photo of the most recent Republican president. Another photo shows Butler-Short with the first President Bush. "Since I was allowed to vote, I've been voting for the Republican Party," Butler-Short said, "but it was never more important than today." 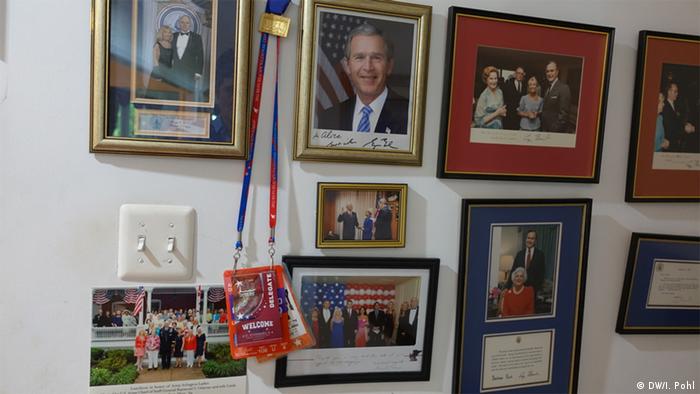 Butler-Short believes that voters must stop the Democrats from winning a third straight presidential term or the country risks being lost forever. "The Democrats want to move our great country to socialism," Butler-Short said. "And the next president will determine whether our Supreme Court will be dominated by left-wing, socialist judges for the next 80 years." She has a clear-cut definition for a word that many in the United States consider the ultimate evil: "What I understand by socialism? Equal misery for all."

The abusive speech used by Donald Trump seems to be at odds with the mannerisms of a cultivated lady who chooses her words carefully. "If he's a little crude sometimes, frankly we don't care - we don't care," Butler-Short said. "We want him to fix things. It's more important that he fix this country than it is that every word out of his mouth is politically correct. We've had it with that." In fact, she said, it is Trump's shooting from the hip that has won her over. "What's the use of all the nice rhetoric if nothing happens?" Butler-Short dismisses the common assertion that Trump hasn't the faintest idea about politics. "How can he be so successful if he doesn't have a clue?" she said. "Look at his towers and golf courses, and you'll see that he's able to make political deals, too."

Butler-Short blames "the liberal media" for its "exaggerated" criticism of Trump. "I tell my women: 'Don't get confused - stay loyal,'" she said. "Donald Trump says what he says simply because he's no politician. I love his lack of political correctness."

Alice Butler-Short said she had achieved everything she ever wanted to in the United States. Now it is time to ensure that her children and grandchildren will get the chance to fulfill their dreams. "That's why I fight for Donald Trump," she said, "because he's strong enough to make sure this will happen." And it is this hope that has given her the strength to come to terms, even with her candidate's frequent setbacks. "I still have one desire," Butler-Short said. "I want my grandchildren to say: 'My grandmother was part of the movement that saved America.'"