Asylum seekers and "tolerated foreigners" face a de facto ban from working in Germany. A planned legal reform has done little to change the situation. Many migrants want to earn their own money, but are not allowed to. 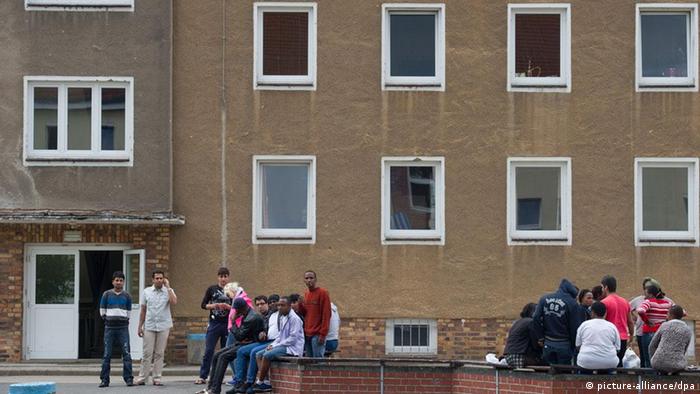 When times are bad, the minutes crawl by and the hours drag on without end, says Mitra Hashemi. She shrugs her shoulders; her father Aman nods his head. The Hashemi family knows boredom. In 2010, they came to Berlin as refugees, in order to escape the war in Afghanistan. Since then, they have tried in despair to find a job for Aman - any job.

"In the beginning, we thought it would be easy," 20-year-old student Mitra says. "You just search the Internet - done."

She knows all the Internet sites that list job openings. In Afghanistan, Aman Hashemi was a businessman and imported goods from Iran. Now, the family is looking for menial labor positions. 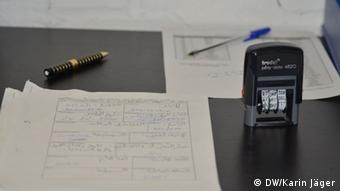 Her father Aman speaks little German. So far, the family has not been able to afford a German course, and the immigration office won't pay for it. Mitra learned fluent German in her school in Berlin and has become the voice of the family.

A small garment business finally offered Aman a position ironing clothing. But the immigration office refused to grant him permission.

Refugees applying for asylum, like the Hashemis, are allowed to work after living in Germany for a year, but they have to receive the approval of the immigration office. The same goes for "tolerated foreigners," people who do not have asylum status but who have not been deported due to civil war in their home countries.

But before a work permit is issued, the Federal Employment Agency investigates whether or not qualified Germans are also available for the job in question.

"It's like a normal application process," says a spokeswoman for the Federal Employment Agency. That means that open positions are advertized nationwide. The agency does not have official statistics on how often it investigates whether qualified Germans are available for the advertized jobs.

But lawyer Berenice Böhlo says that the preference given to German citizens results in "a de facto work ban" for asylum seekers. With little to no German skills, they often seek positions as cleaning personnel or as helpers in bakeries.

"For such cases, there are always jobless Germans and EU citizens or foreigners with work permits who are available," Böhlo says.

The sometimes tedious process involved in hiring asylum seekers scares off many employers, the lawyer says. In Berlin and eastern Germany, where unemployment is high, it is very difficult for "tolerated foreigners" to receive a work permit, according to Böhlo. And for people applying for asylum, it's almost impossible, she says. 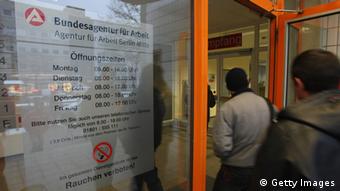 Many of Böhlo's clients continue to fill out forms, write applications and go to the immigration office in the hope that they will be able to find a job. Böhlo estimates that not even 10 percent of them receive the necessary permission from the employment agency.

Little will change in the future, according to Böhlo, despite a decision by the federal cabinet to ease the work restrictions. Starting on July 1, "tolerated foreigners" who have been in Germany for four years will no longer play second fiddle to qualified Germans in the job search. But the lawyer Böhlo considers this measure insufficient. She demands instead free access to the job market, as is the case in other EU countries.

Böhlo believes that the government is trying to deter asylum applications through a de facto work ban. But she considers this policy of deterrence to be counterproductive.

"You finance people for years, instead of offering them the possibility to finance themselves," Böhlo says.

And the longer they have to wait, the less energy they have to learn German and try to integrate themselves. "It demoralizes the people," Böhlo says.

A feeling of inferiority

Mitra says that her father has depression. It was all too much: The endless waiting and the destroyed hopes for a job or at the very least a German course.

"It makes you feel inferior," Mitra adds, pulling at her loose head scarf. "Because you think: I am a person just like the others."

Aman sits for hours in front of the television, constantly changing the channel in search of news from Afghanistan, which makes him even more depressed.

The German government would like to make life easier for refugees looking for work. Marei Pelzer of the Pro Asyl refugee rights organization tells DW that the reforms aren't nearly enough. (28.05.2013)

Civil wars, such as the one in Syria, force millions to seek refuge abroad. Some of them land in the EU and end up being deported across the continent. A human rights group is calling for major asylum policy changes. (19.04.2013)

"It's a very bad feeling, when I have to go to the welfare office to beg for money," says his wife Razia. "You don't want to live off the money of others," Mitra adds. "We just want to be a part of society."

In Afghanistan, the two women could hardly leave their home in Herat and had to wear a blue Burka when they did go out. Mitra was not allowed to go to school, so she received private lessons at home. Was there a chance to work in Afghanistan? Absolutely not. Both Mitra and Razia shake their heads.

After she passes her next exams, Mitra would like to become a dentist. Her mother wants to become a kindergarten teacher. Soon they will be able to pursue their plans without the approval of the immigration office. The Hashemi's asylum application was recently approved. They now will automatically receive work permits and can apply for jobs freely.

Mitra has begun to search the Internet again for a job for her father. When he finds a job - any job - Aman Hashemi plans to buy sweets, either Turkish baklava or perhaps chocolate. He wants to give the sweets to his friends to celebrate with them. Aman makes a short pause. Then he laughs. No, he'll buy a bus ticket before the sweets. He'll go to the kiosk and instead of presenting his Berlin pass - which identifies him as a refugee or welfare recipient - he'll pay for the ticket in cash.