Gliese 486 b has earth-like traits. Though it is unlikely to harbor life, scientists say it could offer vital data in the search for extraterrestrial life. 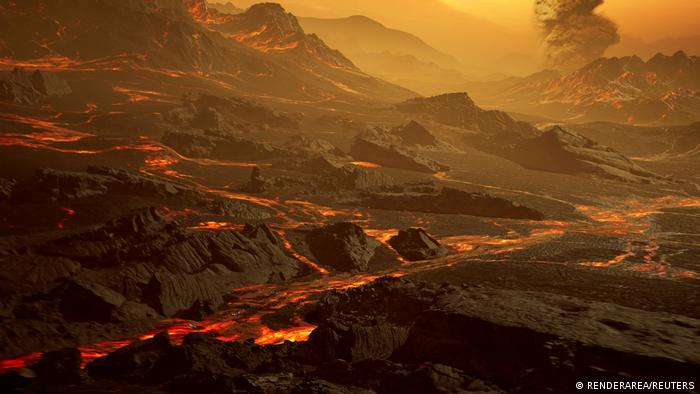 An artists's impression of the surface of Gliese 486 b

A planet discovered near our own solar system could help in the search for life elsewhere in the universe, scientists said on Thursday.

The 'Super-Earth' exoplanet with a surface temperature slightly cooler than Venus offers a prime opportunity to study the atmosphere of a rocky earth-like alien world, as scientists seek clues that could one day lead to the discovery of extraterrestrial life.

How could the planet offer clues for extraterrestrial life?

Researchers from Germany's Max Planck Institute for Astronomy said the planet — Gliese 486 b — is not itself a promising candidate as a refuge for life as it is hot and dry, with possible rivers of lava flowing across its surface.

But its proximity to Earth and its physical traits make it ideally suited for a study of its atmosphere by the next generation of space-borne and ground-based telescopes. NASA is due to launch the James Webb Space Telescope later this year.

Scientists could extract data to be able to decipher the atmospheres of other exoplanets — planets beyond our solar system — including ones that may harbor life.

"The exoplanet must have the right physical and orbital configuration to be suitable for atmospheric investigation," said planetary scientist Trifon Trifonov, lead author of the research published in the journal Science.

Which planets other than Earth are habitable?

What is a 'Super-Earth'?

A 'Super-Earth' is an exoplanet with a mass greater than our planet but considerably less than our solar system's ice giants Uranus and Neptune.

Gliese 486 b's mass is 2.8 times that of Earth and is located in our celestial neighborhood, some 26.3 light years away, making it among the closest exoplanets.

"Gliese 486 b cannot be habitable, at least not the way we know it here on Earth," Trifonov said. "The planet only has a tenuous atmosphere, if any."

Nevertheless, astrophysicist and study co-author Jose Caballero enthused: "We say that Gliese 486 b will instantaneously become the Rosetta Stone of exoplanetology — at least for Earth-like planets," he said in reference to the ancient stone slab that helped experts decipher Egyptian hieroglyphs.

More than 4,300 exoplanets have been discovered by scientists. Some have been large gas planets, similar to Jupiter, while others have been smaller, rocky Earth-like worlds, the kind considered candidates for life to flourish.

Work and live on Mars: Inside a new base developed for future missions

In treat for stargazers, five planets moving into rare alignment 24.06.2022

In a year of spectacular astronomical events, five planets — Mercury, Venus, Mars, Jupiter and Saturn — are aligning with a crescent moon. Here's the how and the why.

No, Venus and Jupiter are not about to collide for real. But it will look like that on April 30. The two brightest planets are aligned with Mars and Saturn.