AstraZeneca: UK to offer alternatives to under 30s

British medical regulators say the Oxford-developed vaccine is still safe, but will now offer alternatives to people under the age of 30. Officials say it will have a "negligible" impact on the UK's rollout. 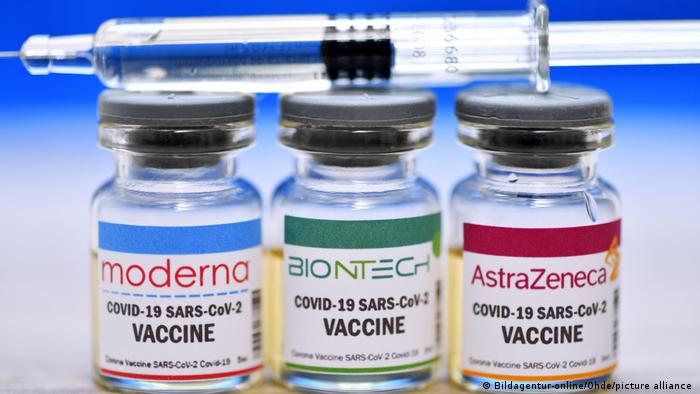 British medicial regulators on Wednesday said adults under 30 should be offered an alternative to the Oxford/AstraZeneca COVID-19 vaccine, after reviewing cases of rare blood clots.

Jonathan Van-Tam, deputy chief medical officer for England, said the move would have little or no impact on the country's vaccination drive.

"Because of our supply situation in relation to alternative vaccines, the effect on the timing of our overall program should be zero or negligible," he told reporters.

What did the UK regulator say?

The head of the Medicines and Healthcare Products Regulatory Agency, June Raine, said that the benefits of taking the vaccine continued to outweigh the risks "for the vast majority of people."

"The balance of benefits and risks is very favorable for older people but it is more finely balanced for younger people," she said. The risk of hospitalization or death for younger people as a result of COVID is far lower than for the elderly.

Officials said there had been been 79 reports of suspected blood clots with low platelets up to and including March 31. Nineteen people had died as a result, three of whom were under 30 years.

The UK has handed out more than over 37 million COVID-19 vaccine doses including BioNTech-Pfizer and AstraZeneca’s jabs (31.6 million first doses and nearly 5.5 million second shots).

What is the EU doing?

The announcement came shortly after the European Medicines Agency decided not to restrict the use of the vaccine, while noting the "possible link" to "very rare" cases of blood clotting.

A number of EU countries had decided to put temporary age restrictions on the jab in the run-up to the EMA review, however.

France, Germany, the Netherlands, Sweden, Iceland, North Macedonia and Finland are only giving the Oxford vaccine to the elderly, at least at present.