As the Singapore Airshow 2016 kicks off, DW examines the latest trends in the Asia-Pacific's civil aviation industry, and the countries profiting most from the rise in domestic and international air passenger numbers. 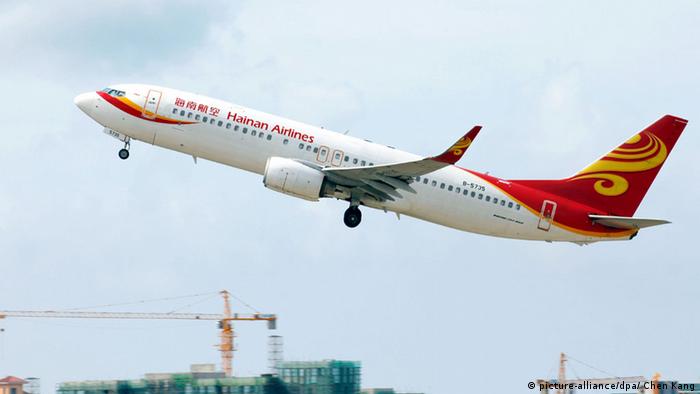 Covering all sectors of aviation, Asia's largest aerospace and defense exhibition will be taking place from February 16-21 at Singapore's Changi Exhibition Centre. Over 1,000 companies from some 50 countries - including top manufacturers and potential buyers - will be taking part in the fifth edition of the Singapore Airshow.

But the bi-annual event, which usually draws tens of thousands of visitors and serves as a platform for the industry's leading players, has also become a showcase for the Asia-Pacific's (APAC) growing importance in the global commercial aviation market.

"Asian airlines and their increasing passenger numbers are driving global aviation markets. We envisage that APAC will account for up to half of total annual increase in air traffic by 2020," Shukor Yusof, an aviation expert at Endau Analytics, told DW.

The Asia Pacific's aviation industry has experienced remarkable growth over the past decade. In fact, the number of Asian airlines now totals 230, with an estimated 27 percent of the world commercial aircraft fleet, according to global analytics firm IHS. APAC also accounted for around 28 percent of international and 40 percent of domestic scheduled air passenger traffic last year, as Rajiv Biswas, Asia-Pacific chief economist at IHS, told DW.

"The sharp increase in Asian airline passenger numbers reflects fast-rising household incomes in many of these countries, notably China and India, as well as the rapid growth of Asian low-cost carriers, which have helped to make air travel much more affordable in Asia," said Biswas.

Analyst Yusof has a similar view: "Leisure travel is the main activity for many passengers, so we see low-cost airlines among the most active players in the region - flag carriers less so, given the decline in premium travel," he told DW. 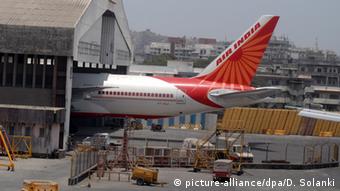 Indeed, Asian budget airlines have significantly expanded their fleet sizes over the last decade and now account for around one-third of the global low-cost carrier passenger market. In 2015, for instance, the number of domestic air passengers in the region grew by 10.5 percent, while the number of international air passengers rose by 8.2 percent, according to IHS.

And these numbers are expected to keep growing in the coming years, as the analytics firm projects the region's commercial air transport sales to grow at 9.2 percent per year in nominal USD terms over 2016-2020. Among the key factors driving this trend will be the significant fall in APAC's air transport operating costs due to the sharp decline in oil prices - jet fuel accounts for around one-third of APAC airline costs - as well as a strong growth in passenger numbers, said Biswas.

In this context, experts say China and India are to remain the region's main aviation drivers, although high growth rates in the sector are also forecast for Indonesia, Philippines, Malaysia, Vietnam and Sri Lanka.

With continued rapid rise in Chinese household incomes expected over the medium term, the Chinese air transport industry's sales growth is forecast to grow at an average annual rate of 11.3 percent over the next four years - a pace that is well above the APAC regional average growth rate, said IHS in its World Industry Service forecast.

In terms of popular destinations, analyst Yusof indicated that the number of Chinese traveling to major Southeast Asian cities such as Singapore and Bangkok could fall as they now seem to prefer to fly to Europe and North America for leisure.

"The Chinese are setting the pace for air travel, given their increasing purchasing power. This pattern will continue for the foreseeable future, despite China's gradual economic slowdown," the aviation expert told DW. 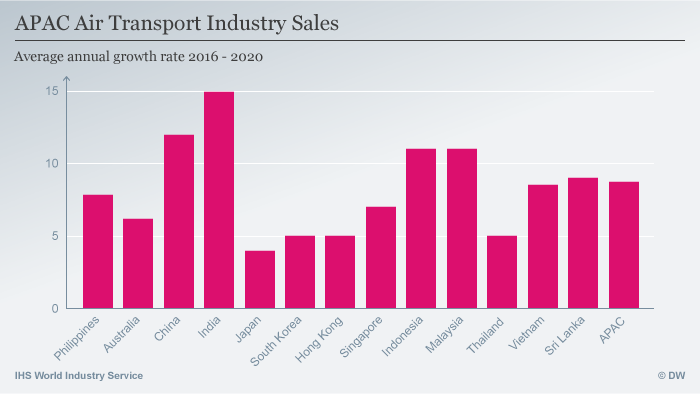 In neighboring India, total sales are forecast to grow at a yearly rate of 14.2 percent over the same period. Governments in both countries as also expected to increase infrastructure spending, with China planning to build an additional 66 airports over the next five years, and India eyeing the construction of around 50 new ones over the next decade.

Trends are similar in Southeast Asian countries. For instance, the city-state of Singapore - where aviation plays a critical role in the country's economy - remains proactive in attracting investors as well as creating ideas and jobs in the aerospace sector.

Vietnam's two main carriers - Vietnam Air and Vietjet - are also performing well in terms of growth and route expansion. "Vietnam has a young, vibrant population and this is driving the aviation sector domestically and regionally," said Yusof.

As for Indonesia, which features the biggest and fastest-growing market in Southeast Asia, analyst Yusof says that while some progress is being made in the country, it is being stunted by bureaucracy and rampant corruption.

In any case, to meet the region's growing demand, Asian airlines are expected to keep their big appetite for new aircraft, particularly single-aisle planes. For instance, Yusof says that before the decade is over, three airlines - AirAsia (Malaysia), Indigo (India) and Lion Air (Indonesia) - will have taken delivery of over 500 aircraft from Airbus and Boeing.

India’s economy is on the rise

The Indian economy is on the rise, says Chandrajit Banerjee, Director General of the Confederation of Indian Industry. Manuela Kasper-Claridge caught up with him during the World Economic Forum. (22.01.2016)

The Trans-Pacific Partnership, one of the world's biggest multinational trade deals, has been signed by 12 Pacific Rim nations. Economist Gary Hufbauer spoke to DW about the risks and advantages of the trade pact. (04.02.2016)

What is driving inequality in India?

While many Indians live on less than a dollar a day, the country boasts a relatively high number of millionaires. DW takes a look at the factors behind this gap between the rich and the poor. (22.01.2016)

But that's not all. Over the next two decades, Asia-Pacific airlines are forecast to account for 38 percent of total new commercial aircraft orders according to Boeing long-term forecasts, making the Asia-Pacific a key growth market for the commercial aerospace manufacturing firms such as Boeing, Airbus, Rolls-Royce and Pratt & Whitney.

There are many positive effects from the rapid growth of the commercial aviation sector. These can be seen in new employment growth, value-added contribution to national GDP, the creation of industry clusters around aviation and aerospace industries, as well as accelerated development of the national tourism industries.

However, there are also some downsides related to the management of carbon emissions from the global airline industry, aircraft noise in urban areas, as well as the land requirements close to major cities for major airports, particularly for expansion, as economist Biswas pointed out.

There is also the potential for accelerated transmission of diseases around the world, such as SARS, Ebola or the Zika virus. "This requires high technology and advanced health safety standards on board aircraft as well as advanced health risk management on the ground at international airports," said the expert.

Analyst Yusof that believes liquidity could pose a key challenge for these countries. He argues that a currency mismatch such as the weakness of many Asian currencies vis-a-vis the US dollar could affect aircraft financing. 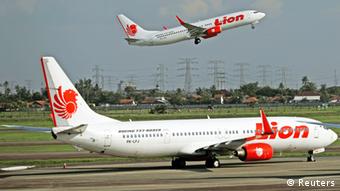 For example, he says, "Vietjet is taking an aircraft every month this year. It's not clear whether the company's cash-flow will be able to sustain this if Vietnam's currency is further weakened. This could also be the case for countries such as Malaysia and Indonesia."

Last but not least, the analyst warns of the consequences of over-estimating the degree of the market expansion. "Too much expansion means too many seats, therefore airlines will inevitably make less profit as fares will be slashed amidst intense competition," Yusof told DW.