After a protracted financial crisis, Spain's economy is finally showing signs of a stable and sustainable recovery. The Labor Ministry has said far fewer out-of-work people are out looking for a job. 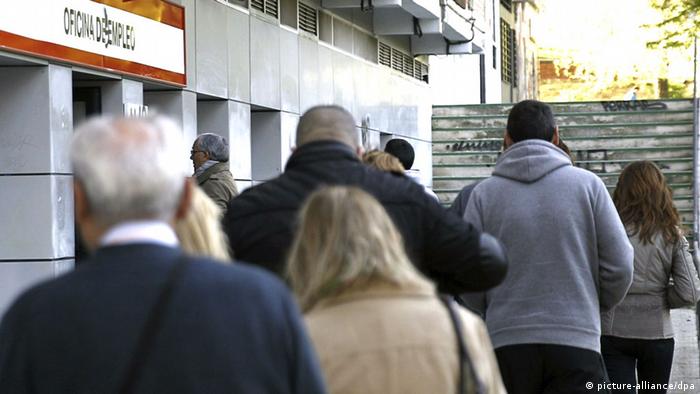 There were fewer Spaniards looking for work last month than in any March in the last 13 years, the Labor Ministry in Madrid said on Monday.

According to the government, the 60,214 fewer jobseekers marked a 1.3 percent drop in the overall unemployment rate over the previous month. Compared to one year ago, 343,927 fewer people were actively seeking employment - a fall of 7.2 percent.

The Labor Ministry only counts the number of jobless who are registered as such and actively seeking work. Unlike the statistics agency INE, it does not count those who are unemployed not yet looking for a job.

According to INE, Spain's overall unemployment rate at the end of 2014 was 23.7 percent. At the time, it said there were 5.46 million Spaniards out of work.

Labor Ministry estimates on Monday put that figure at 4.45 million.

Either way, the numbers show Spain emerging from a protracted financial crisis, which began when the 2008 real estate bubble in the country burst. Spain suffered some of the highest unemployment in the eurozone, with around half of young jobseekers unable to find work.

Now the economy is gaining traction, particularly in the service sector, the Labor Ministry said.

Unemployment in the eurozone on the whole is also down. Last month, the bloc's official statistics agency Eurostat said overall unemployment had fallen to 11.3 percent in February from 11.4 percent the previous month.

In Germany, the level of job seekers is at a post-reunification low - yet another sign that Europe's largest economy was expanding, galvanized by strong domestic demand.

How Spain seeks to prop up its young and desperate generation 20.10.2021

The 77 Percent looks at why finding employment for young people were so difficult in 2020. Our panel in Ghana debates what must be done to make 2021's employment prospects better for young job seekers. We also hear from an industry insider on where jobs are going to be found in the future.