The Spanish economy is less prone to financial contagion than it was a couple of years ago. But with new party Podemos making waves, the country's politics could be influenced by Greece. Guy Hedgecoe reports from Madrid. 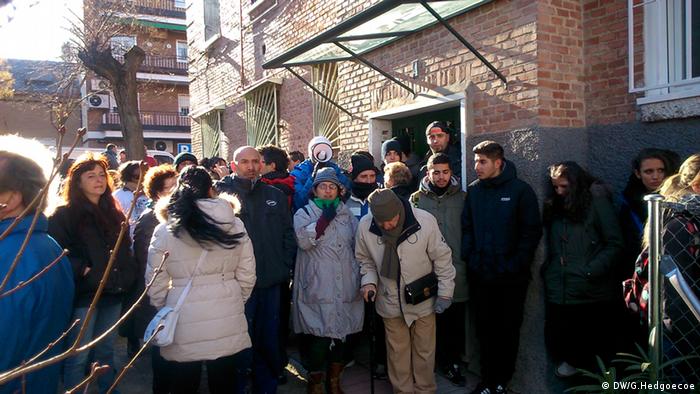 It's a dark, chilly morning in San Blas, a working-class district of Madrid, and Pepe Rodriguez is waiting in the street with about 70 other people. A family of eight who live nearby are due to be evicted from their apartment for failing to make mortgage payments. Rodriguez and his fellow activists plan to prevent the foreclosure from taking place.

There are currently around 20,000 such evictions each year in Spain, and according to Rodriguez, they reflect the austerity that the European Union, and especially Germany, have imposed on his country.

"Right now Spain is a sort of province of the European Union, it doesn't have sovereignty," the 60-year-old told DW. "It makes me laugh when I see people wave the Spanish flag - because Spain is worth nothing right now."

Moments later, those gathered successfully thwart the eviction by blocking the door of the building and preventing the authorities from entering. Rodriguez and the other activists celebrate with cheers and chants.

He believes it's one small victory against austerity. Rodriguez says he is even more heartened when he looks across the Mediterranean to Greece, where the new Syriza-led government of Alexis Tspiras is trying to cast off EU-sponsored financial constraints. Rodriguez even dreams of "a domino effect" across Europe. 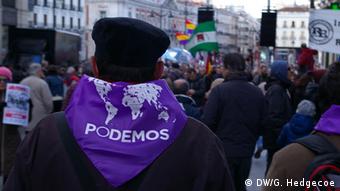 Podemos has become a threat to Spain's traditional parties

Arguably, that effect is already underway in Spain. Founded just a year ago, the anti-austerity party Podemos, which has close ties to Syriza, has broken the dominance of the country's traditional two powers.

Many of those present at the blocked eviction voice anger at austerity and support for the new Greek government, as well as for its Spanish counterpart.

"Podemos is going to make a big impact and change this situation," said Maximo Arcediano. "At least they'll make sure people aren't kicked out of their homes."

Days after the Greek election, Podemos leader Pablo Iglesias addressed over 100,000 party supporters in Madrid and warmly praised Tsipras, even speaking a few words of Greek.

Podemos has played down specific similarities between the two parties, but Miguel Urban, one of its co-founders, said both harness the same spirit.

Political commentator Josep Ramoneda says that the lack of concrete policies on the part of Podemos makes drawing parallels difficult. But he believes Greek political developments could influence Spain. "You can only really compare [Podemos and Syriza] when it comes to their call for European policy to be reviewed - in that sense they do have a lot in common," he said.

Syriza's successes and setbacks, he added, could influence the performance of Podemos, which will compete in a general election expected to be held before the end of 2015.

This is not the first time the fortunes of the two nations have been closely linked. At the height of the euro-zone financial crisis, Greek woes had a direct impact on Spain, whose own lack of growth, high unemployment and weak banks exposed it to punishment from the markets. As Spain's borrowing costs soared, there was speculation that it would follow Greece, Ireland, Portugal and Cyprus in requesting a full sovereign bailout. That never happened, although it did require a 100-billion-euro EU rescue for its banks. 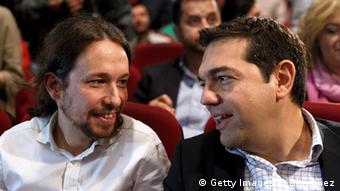 However, since Greece's return to the spotlight, Spain's politicians have been keen to emphasize the differences between the two country's economies.

Socialist leader Pedro Sanchez said it was "irresponsible" to compare them.

Prime Minister Mariano Rajoy has been equally adamant. On Thursday, he got into a diplomatic fracas at an European summit in Brussels, after insisting that Greece should fulfill its financial commitments. He also drew attention to the fact that Spain had lent Greece 26 billion euros, drawing a barbed reply.

"Some people, and also Prime Minister Rajoy, see a potential success of the Greek government as a political problem for them, but this is a mistake," Tspiras said. "If we succeed or not, the problems will still be there."

Spanish observers have, for the most part, highlighted how far the country has come since the last euro-zone crisis, pointing to the fact that their economy is over five times the size of that of Greece, while the banking sector has been reformed and GDP is growing.

"The macroeconomic situation is very different right now to how it was two or three years ago," noted the Negocios.com website. Contagion, it added, is much less likely than in 2012.

"Spain has proved it has done its homework … the reforms carried out and the austerity implemented are beginning to bear fruit and have ensured that the markets trust our economy again." 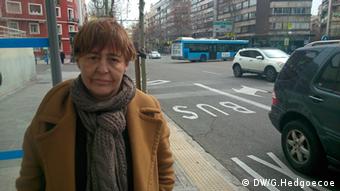 Spaniards, like Julia Ortiz, are worried about what a Greek exit from the euro zone could mean for them

In the well-heeled Salamanca district of Madrid, there is little evidence of the half-decade recession from which Spain recently emerged. However, schoolteacher Julia Ortiz is concerned about Greece, believing it might end up exiting the euro zone. But she is confident Spain will not be directly affected - as long as the right party is in power.

"The Spanish economy is in a bad way," she said. "It can recover, but not with Podemos. Podemos has been a scare, and the other parties have given it an easy ride."

Neomar Galindo, who is unemployed, is less optimistic, highlighting the 24-percent jobless rate. He believes that no country would avoid contagion from a full-blown Greek crisis.

"If Greece has problems, that's going to cause problems for the whole of the EU, one way or another," he said.

Greece is due to hold technical talks with its creditors ahead of a crucial meeting of eurozone finance ministers. It's hoped a deal can be reached by the end of this month, when Greece's bailout is due to expire. (13.02.2015)

What consequences Greece's bankruptcy may entail

Portugal made many sacrifices before it could leave the troika's rescue program in 2014. That's why the Portuguese are staunchly opposed to what they call special treatment for Greece, reports Jochen Faget from Porto. (03.02.2015)